Apple is considering a major corporate office expansion in northern San Jose, California, according to the Silicon Valley Business Journal. The report claims that Apple is shopping at least two properties that it could lease in the city: Ellis Partners' 296,000-square-foot 101 Tech R&D building along Orchard Parkway and the 1.5-million-square-foot Coleman Highline development site near the Mineta San Jose International Airport. 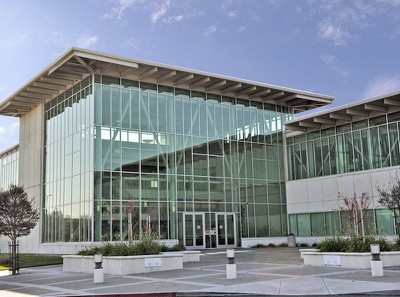 Ellis Partners' 296,000-square-foot 101 Tech R&D building along Orchard Parkway
With limited real estate options remaining in its Cupertino, California hometown, Apple has expanded to nearby Santa Clara and Sunnyvale in recent years. But with a growing demand for additional office space, beyond its existing One Infinite Loop and upcoming Campus 2 headquarters in Cupertino, the company could soon make its first big splash in San Jose, the largest city in Silicon Valley.

"If Apple does do some kind of expansion into North San Jose, it may have more to do with simple availability than anything else given the lack of building sites closer to Apple’s home," the report claims. "That’s not necessarily a bad thing, but simply the path of progress. And San Jose could finally be in the middle of it."

The report claims that some other companies including Tesla have shown interest in the real estate properties, and notes that it is possible the company does not sign a deal in the end. San Jose is home to a number of large technology companies, including Adobe, Cisco, eBay and IBM, but the city has failed to attract heavyweights such as Facebook, Google and LinkedIn. Roughly 25% of Apple employees live in San Jose per a 2013 economic impact study prepared for Apple.

Macboy Pro
Too much money but not enough to throw in an adapter with their new Macbook retina 12" systems.
Score: 14 Votes (Like | Disagree)

Who decides what's "too much" money and exactly why should they give you free things to adapt new technology to accommodate legacy gear?


They have more money than (anyone) ever and yet they are becoming worse with their penny pinching techniques.

Apple could do a lot to increase the user experience for customers, but it seems like they're caring less and less. [Not saying that the adapter is the best example, but certainly one of.]

Anyone else think this mega alpha status is not becomjng of the Apple us folk grew to love. Its fast becoming a corporate *******
Score: 11 Votes (Like | Disagree)

Good for them if they can get away with it. And it appears they can!

Good for them..? In the short term, maybe. Its short-sighted and not in keeping with their orginal core values.

They're big enough now that it'll be many years yet before they can screw it up completely. But they will; every empire crumbles eventually. And I believe this is how it begins.
Score: 10 Votes (Like | Disagree)

MacVista
Apple is becoming the new old Micro$oft.
And Microsoft is now getting their act together.
The next 10 years will be quite interesting. :D
Score: 6 Votes (Like | Disagree)

Another "Cook is a moron" statement...

May I ask which products you've launched and which multi-billion dollar company you're (successfully) running?
Score: 4 Votes (Like | Disagree)

Precisely. Finally someone gets it.


It feels like Tim has given precedence to his fellow beancounters over the design team in final component choices. Perhaps this array of disconnected premises add the layers of poor communication. Or maybe Tim's just ******** the bed.
Score: 4 Votes (Like | Disagree)
Read All Comments