Mophie's Watch Dock with non-integrated Apple Watch charger
The change is coming for manufacturers in Apple's Made for Apple Watch program, which is similar to the Made for iPhone/iPod/iPad program, known more simply as the MFi program. This will allow manufacturers to obtain the charging pad at the end of the Apple Watch charging cable so that they can install them in their dock and stand accessories. Previously, users had to insert their own charging cables into third-party stands and docks, making those products a little complicated to set up.

Then it's not for you. Plenty of people get a lot of use out of it.
Score: 15 Votes (Like | Disagree)

nutmac
I applaud the move but I think Apple should make a first party Nightstand-friendly stand of its own.
Score: 11 Votes (Like | Disagree)

No. It's more clutter because it's an additional object that's physically present on your nightstand. But it might use less real-estate - I'll give you that.

But how does this new "Nightstand Mode" in watch OS2 figure into it? The watch needs to be on it's side and quite stable so you can, bleary-eyed, and with impaired fine motor skill, whack the crown straight DOWN to see the time at 4 AM. 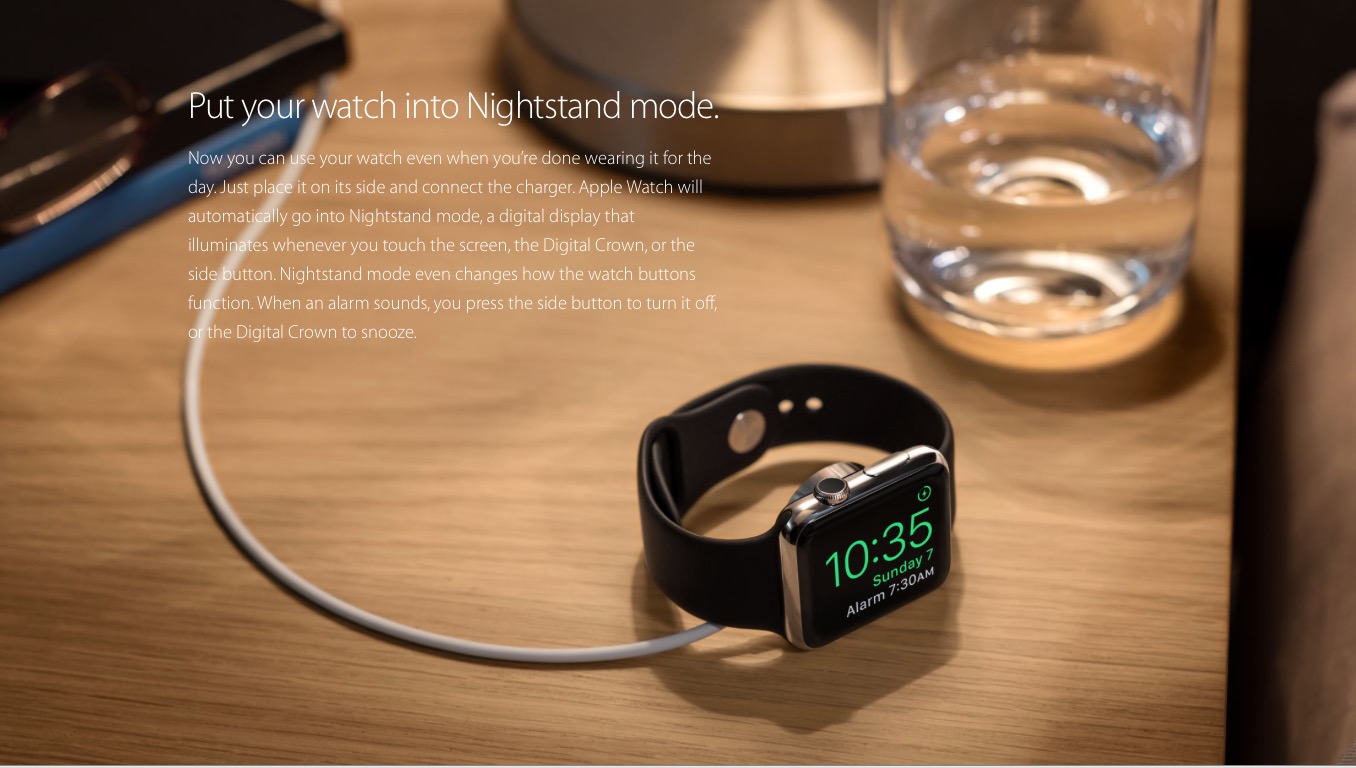 Actually nightstand mode turns on at the slightest of movements of the watch. In fact all I do is lightly tap my bedside table and the time is displayed... It is and extremely useful feature and also the friends button is now the off button for the alarm whilst the crown is the snooze button.
Score: 6 Votes (Like | Disagree)

Thank god. I was afraid that this would be an Apple Watch thread without this comment in it. Seriously, who cares? What compells people to go in threads about products and say that they don't need one? What does it add?

I guess I will go now to the Procter and Gamble forums and post why I don't need tampons.
Score: 5 Votes (Like | Disagree)

MacDarcy
I still don't get the appeal of the apple watch. I really don't see it as a must have device at all. I have zero desire for one. But that's me.
Score: 5 Votes (Like | Disagree)

Your response has nothing to do with the topic of this thread. Just why did you feel it necessary to make your post? No one really cares that you don't like the watch! Please take your don't like comment to the "don't like" thread. Thanks.
Score: 4 Votes (Like | Disagree)
Read All Comments

Tuesday February 23, 2021 7:07 am PST by Hartley Charlton
Over the past week, some M1 Mac users have been reporting alarming SSD health readings, suggesting that these devices are writing extraordinary amounts of data to their drives (via iMore). Across Twitter and the MacRumors forums, users are reporting that M1 Macs are experiencing extremely high drive writes over a short space of time. In what appear to be the most severe cases, M1 Macs are sai...
Read Full Article • 710 comments