Adobe is hosting its annual Adobe MAX creativity conference today, where the company is announcing new mobile apps, updates to a number of Creative Cloud products, and unveiling new services.

The two new mobile apps Adobe is releasing today include Photoshop Fix and Capture CC. Photoshop Fix was highlighted on stage at Apple's recent iPad Pro unveiling, where it was used on the new 12.9-inch tablet. Photoshop Fix [Direct Link] is an image retouching and restoration-focused app that includes powerful Photoshop tools like the Healing Brush and Liquify. 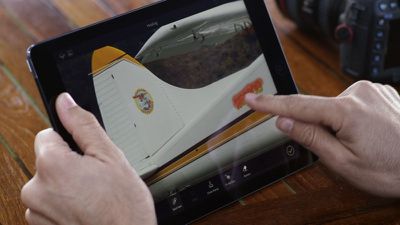 Each of Adobe's apps interfaces with its range of Creative Cloud desktop apps via CreativeSync technology, allowing files to be transferred and worked on between mobile and desktop devices.

Most of Adobe's desktop apps are receiving new features today, with the changes for more popular apps listed below.

Both InDesign CC and Illustrator CC are being updated with new Touch workspaces. Illustrator CC is also gaining a new Shaper tool that combines 12 tools and panels in one, non-destructive Live Shapes, and improved Smart Guides, while InDesign CC is getting new online publishing features. Premiere Pro CC includes expanded UltraUD support for editing 4K to 8K video footage, plus it will gain support for HDR workflows.

On the services side, Adobe is adding video support to its Adobe Stock feature, allowing users to download and purchase video content right within the CC desktop apps. Adobe is also announcing Adobe Portfolio, which is free with any Adobe Creative Cloud plan. With Adobe Portfolio, Adobe customers can create simple portfolio websites that are powered by Behance.

Adobe will also be debuting a new CC desktop app that's being developed under the codename "Project Comet." Details on Project Comet will be available at the MAX conference.

blackcrayon
Maybe I'm just getting old, but does anyone else think they have *way* too many apps? I mean the number of desktop CC apps is already a dozen or so, and now they have a bunch of mobile apps, all with different names and overlapping/non overlapping feature sets than the desktop counterparts...
Score: 14 Votes (Like | Disagree)

vladi
Adobe is so lost in mobile apps, freakin thing is so fragmented not even they know how many mobile apps they got, how many of them gonna get replaced or merged or just end up being forgotten. And they cant name one that's actually useful.
Score: 3 Votes (Like | Disagree)

Since Surface has a dedicated digitiser for pen input - it is already more responsive than Apple Pencil can ever be.

Unfortunately not true. The Surface Pro 1 and 2 had Wacom digitizers, but MS moved to N-trig for the 3 and beyond. The N-trig implementation is active capacitive like the pencil, but it's extremely disappointing compared to both the old Wacom digitizer and what we've seen of Pencil. Even the SP1/2's "penabled" Wacom tech isn't great once you start comparing to a real Cintiq, but it was better than the N-trig version.

I'm holding onto my SP2 for the foreseeable future, but it's still good news to have more competitors in a field that's been dominated by one company for decades. I think Apple's implementation could easily be a better performer than both N-trig and the low-tier Wacom digitizers they sell to 3rd parties. The issue of iOS vs. real software is going to be the limiting factor, and nothing Adobe is doing here addresses that issue.
Score: 2 Votes (Like | Disagree)

I'm curious how many of us are still running with CS6?

And, for those of us who are, what killer feature or client requirement is it going to take that will force your hand and make you switch to CC?

Really the direction adobe is in now. CC is amazing, libraries is possibly the biggest feature that could get someone to switch. Having your assets at your fingertips in each app is wonderful then the simple editing to change them across mediums is just beautiful.

iMcLovin
Is it just me that feels that Adobe is focusing on the wrong things. As a professional illustrator I dont care very much about the ton of mobile apps. And not touch either. I just want the features that are in Photoshop/after effects etc to become better, more up to date and most importantly I wish they focused more on performance. Its going to be a long time until I can replace a computer for any professional work anyway, and I really dont care about using touch capabilities in Photoshop. Focus on major performance boosts, Metal, etc...Adobe programs are the slowest and most demanding programs on my computers, without being the most advanced.
Score: 2 Votes (Like | Disagree)
Read All Comments

Sunday February 5, 2023 6:07 am PST by Joe Rossignol
Apple has discussed selling a new top-of-the-line iPhone alongside the Pro and Pro Max models in 2024 at the earliest, according to Bloomberg's Mark Gurman. Based on this timeframe, the device would be part of the iPhone 16 lineup or later. In a September 2022 edition of his weekly "Power On" newsletter, Gurman said there was "potential" for an iPhone 15 Ultra to replace the iPhone 15 Pro...
Read Full Article • 376 comments