Apple began shipping iPhone 6s and 6s Plus pre-orders on Saturday and now FlightAware, a site that offers live flight tracking, has once again begun offering a tool that allows users to track the flights carrying their iPhones after they receive their tracking number. FlightAware also offered the tool last year. 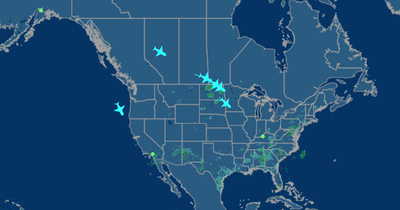 FlightAware says that users who have their UPS tracking number can use their tool to match their "departure scan" with one of the departure times listed in their tool to determine which flight their iPhone is on. The tool will be updated as FlightAware learns more about Apple's shipping strategy for the new phones.

Those who have not received their UPS tracking numbers can track their packages by reference on UPS' website. To do so, users have to fill out the "track by reference" form and input the phone number listed on their Apple account, the zip code its shipping to and country. This tactic may only work with pre-orders made through Apple.

The first iPhone 6s and 6s Plus shipments are expected to arrive Friday, September 25. However, sometimes lucky customers receive their phones early due to shipping errors. Apple has ended launch-day pre-orders and in-store reservations for the two new phones and will not offer walk-in sales for them at Apple Stores in Delaware, Hawaii, Alaska, New Hampshire, Oregon, China, Hong Kong and Japan.

MacRumors readers may also want to join in on the dedicated pre-order threads on the forums, where users are sharing tracking information and socializing while waiting for their new iPhones.

japanime
I thought iPhones were delivered by storks.
Score: 7 Votes (Like | Disagree)

DIRSGT
I remember when I could see MY iPhone coming from China. However, due to my grandfathered plan I had to order directly (or actually "indirectly" thanks Chewbaka) from AT&T this year to keep my plan. Now I can see nothing...AT&T!!!!
Score: 3 Votes (Like | Disagree)

dlastmango
Anyone in Kentucky where you can record these planes coming in? It's like Santa watch on NORAD. Lol
Score: 2 Votes (Like | Disagree)

Icarus73
Spoiler alert: you'll get it on launch day.
Score: 2 Votes (Like | Disagree)

oh, that's right, now i remember why i stopped commenting on the forums here. instead of people actually getting aggregate info from others that have also ordered phones, they just get douchey comments from people.
Score: 2 Votes (Like | Disagree)

You realize that Next actually saves you money now right? It wasn't that way when they first introduced it. But you spend less over 2 years with next than you do with the contract. For one the $40 phone on the plan fee is dropped to $15 while on next, and your taxes and fees are a few dollars lower too. My wife is on a two year contract, I'm on next. We spend more for her line than for mine.

It can totally depend on your situation and requires individual analysis. I did a spreadsheet with my current grandfathered plan w/ corporate discount and compared it to the Next 18 and a new 2yr plan. While my grandfathered plan does not provide unlimited peak time minutes for talk (off peak starts at 7 PM and peak minutes rollover) or unlimited text from non-Apple devices (not iMessages) I still save $360 vs NEXT 18 and $170 vs a new 2yr plan (not grandfathered). These numbers include all the corporate discounts applied. The arrived at differences include service, tax, activation fee, and phone. And that is with only 5GB of data, as I use at least 3-4 every month. I rarely use all my peak minutes (876 banked right now) and most friends have iPhones, so text message limits are not a concern.
Score: 1 Votes (Like | Disagree)
Read All Comments