Just days after iPhone 6s and iPhone 6s Plus pre-orders began shifting to "Preparing for Shipment" status on the Apple Online Store, several customers in the United States and abroad have received notice that the smartphones are now shipping from China for estimated delivery on September 25. 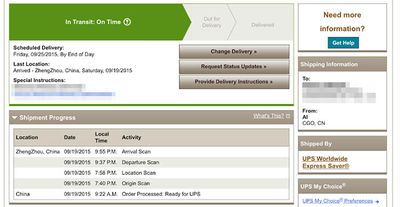 iPhone 6s Plus from Apple scheduled for September 25 delivery via UPS
iPhone 6s and iPhone 6s Plus pre-orders have been shipped by both Apple and carriers such as Verizon and T-Mobile. Most devices are scheduled for overnight shipping next Thursday, meaning that customers should begin receiving their new iPhones on Friday morning, the same day the smartphones launch in twelve countries.

iPhone 6s from Verizon scheduled for overnight shipping on September 24
Apple requires that couriers such as UPS and FedEx in the United States hold iPhone 6s and iPhone 6s Plus deliveries until September 25, but in years past some lucky customers have received their device slightly earlier. Meanwhile, New York City and Philadelphia residents could face delays due to Pope Francis visiting next week.

iPhone 6s and iPhone 6s Plus pre-orders began on September 12 at 12:01 AM Pacific in the United States, Australia, Canada, China, France, Germany, Hong Kong, Japan, New Zealand, Puerto Rico, Singapore and the United Kingdom. Most iPhone 6s Plus and Rose Gold models are now estimated to ship in 3-4 weeks or later.

There still remains the option of standing in line at an Apple Store for a chance to purchase a specific iPhone model on launch day, but expect long lines at most locations. The new iPhones go on sale September 25 at 8:00 AM local time on a first come, first served basis for customers without reservations.

farewelwilliams
waiting for my iPhone 7 to ship
Score: 24 Votes (Like | Disagree)

So, can I walk into the Apple store where I reserved mine before launch day to buy it?

Ask yourself, what is the definition of launch day?
Score: 14 Votes (Like | Disagree)

JFazYankees
And here I am, still processing...
Score: 7 Votes (Like | Disagree)

Happens every time. Shipper will hold the order at their local office until release day. People need to stop thinking they're going to get their devices early.

And tomorrow, every one of them is going to be here moaning and groaning and yelling at Apple for not delivering it on Monday "as promised" by UPS or Fedex.
Score: 6 Votes (Like | Disagree)

I kind of want to keep this quiet until/if delivery is made, but one of my two iPhones is scheduled for delivery tomorrow (Monday) between 10am and 2 pm! I've already received the delivery notice from UPS....

The only kicker is that I am several thousand miles from home and won't return until late Wednesday night!

"I kind of want to keep this quiet until...." as you quietly put this on the internet. lol
Score: 5 Votes (Like | Disagree)

Same here. I always feel like the "S" products are nothing more than service packs with extra bells and whistles that I can't see people using constantly (cue for the "S" fanboys to say...."just because you wouldn't use these features...). The major upgrades are the next point releases.

lol, I guess you only care about the exterior of the phone... Either you are new to the iPhone or started late in the game to understand what S versions of the iPhone bring to the table and they are not bells and whistles to decorate, but actual improvements.
Score: 4 Votes (Like | Disagree)
Read All Comments