Apple celebrated the grand opening of its newly designed Apple Store in Brussels today with much fanfare, ranging from CEO Tim Cook tweeting to long lineups and media forming around the entrance prior to the doors opening. The store is the first located in Belgium at Avenue de la Toison d'Or in a busy shopping area. 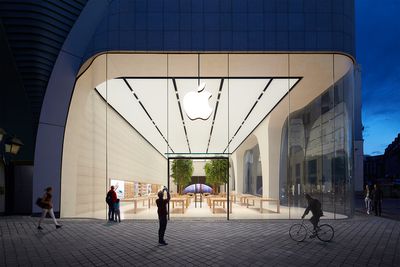 The new Apple Store is the first to feature a next-generation Jony Ive-inspired design with large and virtually seamless curved glass panels on the facade, light boxes extending the length of the ceiling, indoor trees, touch-sensitive sequoia wood tables, new wooden shelves for Beats headphones and other accessories, and a massive digital screen at the back of the store for product marketing.

Apple blog One More Thing was on hand for the Apple Store grand opening in Brussels today and recorded some exciting footage as the doors opened. As with many other grand openings, the day started with a countdown among the hundreds of people lined up outside the store, at which point the doors opened and customers were cheered on by retail employees as they entered.
Apple recently shared a new video that highlights the work of several comic artists in Brussels, which is known for its tradition of comic art, to celebrate the grand opening. The store is open on Monday-Saturday between 10 AM and 7 PM local time and offers a Genius Bar, Workshops and other regular services.

Even Longer
This store is very beautiful indeed.

Like the design, but those should be apple trees, so that everybody sitting underneath could feel like Newton, being hit by such fruit eventually...

Benches below such tree should also be called "genius benches". ;)
Score: 7 Votes (Like | Disagree)

fel10
Its weird how some people act like Apple is a religion. Kind of creepy.
Score: 6 Votes (Like | Disagree)

Goldfrapp
The trees make it oh so cozy inside. I don't think I'd ever want to leave the store. Add a couch, a TV, wine, popcorn, and it'd be Paradise.
Score: 4 Votes (Like | Disagree)

Lycanthrope
I was there today with wife and kids, couldn't pass-up the opportunity to be there on the opening day of the first store in Belgium! We had to queue for an hour, 11:05 - 12:05 - but after that the queue diminished dramatically - probably because it was lunchtime.

Having never seen any Apple Watches, we wanted to take a look as my wife's interested to get one and we were impressed - much nicer that I imagined they would be; wifey wants the new rose Sport, I really liked the black Watch. Bizarrely, they didn't have any for sale, only display/demo; no stock and no launch date. Personally I find that really weird - they're not selling so well, why not make them available in more countries sooner?

Anyway, we enjoyed the experience and the staff were really friendly - which makes a really nice change from the norm in Belgium.

There was a tunnel of staff, cheering, singing and high-fiveing everyone going it - that was big fun, but very noisy and a bit tiring when you'd been in the store for a while.

They gave out a pack of post-cards by Belgian artists with "Apple Store Brussels" printed on the box - I guess that's a memento for the opening day.
Score: 2 Votes (Like | Disagree)

No, this is a site where English is used, so Brussels it is.;)
Score: 2 Votes (Like | Disagree)
Read All Comments