Monday September 14, 2015 6:11 pm PDT by Juli Clover
Burberry is launching a curated channel on Apple Music, making it the first luxury fashion house to do so. The Burberry Apple Music channel is listed under "Curator Playlists," which also includes content from brands and media sites like GQ, Wired, Pitchfork, and Rolling Stone.

Content provided by Burberry includes selections from company's current CEO, Christopher Bailey, along with music played on the Burberry runway and a selection of emerging British talent. 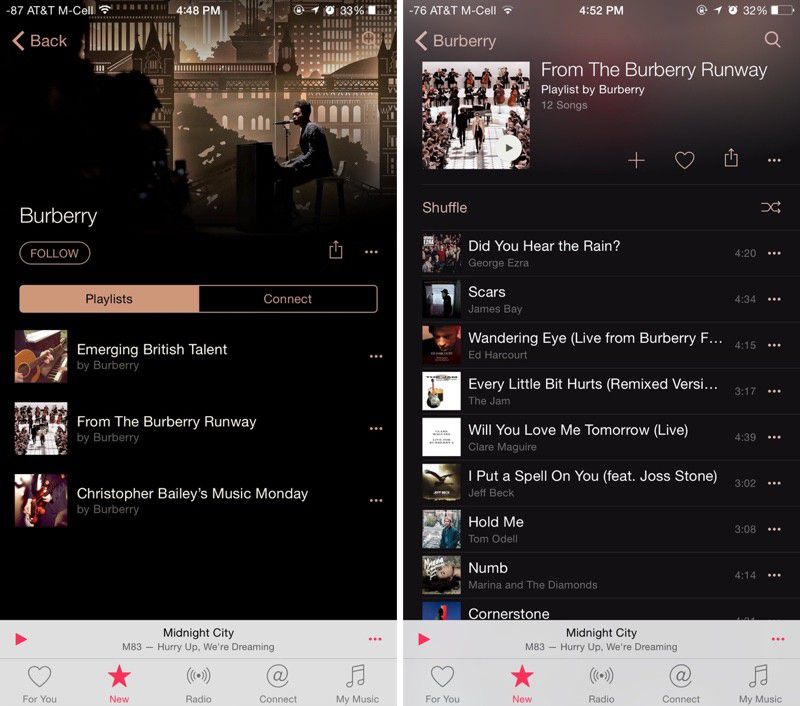 Burberry is the first clothing company to debut an Apple Music channel, but it's not an unusual choice due to its Burberry Acoustic campaign, which supports new British music talent and features acoustic tracks recorded exclusively for Burberry. Burberry employs a full-time music team that works on Burberry Acoustic and matches up artists with record labels.

According to the The New York Times, going forward, the Burberry channel will feature performances, songs, and films that have come out of Burberry's work with artists on Burberry Acoustic. The channel's first exclusive will come from emerging British artists set to perform at the Burberry Womenswear show on September 21.

"I am excited about our partnership with Apple on this amazing platform which will enable us to take what we do now with Burberry Acoustic and share it with an even bigger audience," Christopher Bailey, Burberry's chief executive, said in a statement.

Burberry and Apple have had a long partnership, first teaming up in 2013 to show off the photographic capabilities of the iPhone 5s. Angela Ahrendts, Apple's current head of retail, was also the CEO of Burberry until the Spring of 2014 when she joined Apple. Burberry's new Apple Music channel marks the first collaboration between Apple and Burberry since her departure.

Why??? Why would anyone want this? What's next? Playlists by Walmart?

When you hire a "bozo" (such as Angela) it leads to a bozo explosion. Bozos doing bozo things and hiring bozos. Good call Steve.


Such a reactionary feeling. My thoughts are that you are being histrionic for the sake of inciting a reaction from readers here (if not...oh boy).

You do realise that there are channels/playlists curated by magazines/websites on Apple Music? What is the difference between one curated by staff say at Wired, Pitchfork, or Vogue and one curated by a store?

I'm left wondering why you referenced Steve Jobs-you do realise he died in 2011.

I wish we could 'down-vote' certain posts here.
Rating: 28 Votes

PlutoPrime
Why??? Why would anyone want this? What's next? Playlists by Walmart?

When you hire a "bozo" (such as Angela) it leads to a bozo explosion. Bozos doing bozo things and hiring bozos. Good call Steve.
Rating: 23 Votes

bdkennedy1
"Jeeves, please turn on the Burberry channel while you drive me to the Billionaire's Club, and I don't want to be disrupted while listening. Now pass me the Grey Poupon to put on my duck."
Rating: 21 Votes

Why??? Why would anyone want this? What's next? Playlists by Walmart?

When you hire a "bozo" (such as Angela) it leads to a bozo explosion. Bozos doing bozo things and hiring bozos. Good call Steve.

Bozo? Wow real classy. It appears to be a playlist on Music. Big deal.

What's with all the elitist people here?
Rating: 15 Votes

miketcool
In the words of Donald Trump, Apple Music is a "disaster".

I get get all the marketing venues that open up by allowing brands to connect in this way. The problem is, this service is so far away from being primetime it's not funny.

My experience is COMPLETELY different on each platform. Desktop, Browser, Apple TV, iPhone, iPad. It's all a giant headache. Things are still not working correctly, everything has a different name. Where is Apple Music? My search to find that on each platform begins this painful endeavor. Sometimes I can purchase a song, sometimes it lets me preview, sometimes I can stream it. Playlists are broken. The content is a mess. The feed looks like garbage.

Apple has taken away many things needed as a professional to streamline products for the consumer. Then they have added many things to the consumer that are confusing. I get that Ives has made this design focused, and the coding and ideas have taken a backseat. It's time to hire someone with a vision that isn't incremental stock advancement. HP did that for years. This is Apple for pete's sake. Innovate. Never, stop, innovating.
Rating: 14 Votes

sevoneone
Man... what is Apple becoming? Sadly their target demographics for gold colored phones and watches made of aluminum will think this is the best thing ever, which also reveals Apple's new target demographic. When they bought Beats I really thought they would turn it around and do something great, but it still seems they are out to push Brand with little substance. Think Different is dead, welcome Think where thinking is highly discouraged. :(
Rating: 12 Votes

JCrz
I'm not sure if I'm supposed to laugh or cry at this news.
Rating: 11 Votes

SgtPepper12
I don't get the criticism here, but it's not really front page worthy news, imo.
Rating: 9 Votes

lah
Dear Lord, the reactions to this are insane. Come on people it's just a playlist curated by Burberry - not much different than those Starbucks or Pottery Barn CDs you see at the stores. Sorry this is not evidence that Apple has lost its way. Get a grip folks.
Rating: 9 Votes

I love it how Apple and the slightest bit of Apple new has so much POWER over people's lives, specifically those who get spun up into such a state of uncontrolled frenzy they can't stand it. Yes, it is hilarious to observe, but is is also very sad.


Just as the slightest bit of Apple news has the power to get some to the point of irrational ecstasy and others to defend Apple like their mother was being insulted.

This is fantastic, though unexpected.


What do you find fantastic about it?
Rating: 8 Votes