In late July, the NFL did away with its existing NFL Game Rewind program, which previously gave customers in the United States access to on-demand NFL games after they aired on broadcast television. Game Rewind was replaced with Game Pass, with access being added to the Apple TV and the NFL Mobile app on the iPhone and the iPad. 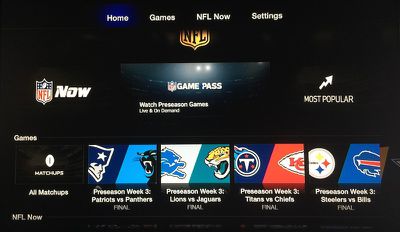 The prior NFL Now channel that was on the Apple TV was limited to historic videos, breaking news, and game highlights rather than complete games as the NFL's contracts with television providers have previously prevented it from showing full game content on the television through the Apple TV.

Game Pass includes live access to most out-of-market preseason games, aside from those that are nationally broadcast, plus on-demand regular season, playoff, and Super Bowl games that are available after they air on broadcast television.

Game Pass is available in the United States, Bermuda, Antigua, the Bahamas, any U.S. territories, possessions and commonwealths (including American Samoa, Guam, Puerto Rico and the US Virgin Islands), and Mexico. An NFL Game Pass subscription is priced at $99.99 and access to content will last until July 31, 2016.

NFL fans outside of the United States also have access to an international "Game Pass" service that offers up live games and on-demand content, which confusingly shares the same name as the new service available in the United States.

Enoch_Root
I'm floored at how the NFL insists upon screwing over its fans. MLB is *light years* ahead in terms of customer experience with MLB.TV. Greed wins out, simply put.
Score: 8 Votes (Like | Disagree)

BrownManUPS
Now for the kicker... if I change my location settings and Apple settings to those of the UK, can I get access to the much better Game Pass that has live streaming of games in real time?
Score: 4 Votes (Like | Disagree)

Just the Apple way. Give you part of something, call it ground breaking, charge the heck out of you and then next year give a little more so they can do it all over again....all the while never providing what others have provided for years at a lower price.

The NFL makes their pricing policies, not Apple.

And Apple is the King of Greed.

Not relevant to this discussion. The NFL is selling you a loaf of day old bread and claiming it's 'fresh!' They're the ones retaining exclusivity to their overpriced Sunday Ticket, not Apple. MLB is light years beyond the NFL in terms of fan friendly access to their LIVE content. I pay $25 a month in-season for MLB.TV, which gives me access to both H/A HD broadcasts of every.single.game on my iPad, iPhone, Apple TV, PS3, Amazon Fire. I cut the cord a few years ago, and MLB was right there with me. This year the HD is friggin' pristine. There's zero drop-off.

The NFL *chooses* how they stream its content to you. It chooses to bend you over the barrel and call it a date. They're the greedy bastards, specific to this instance, not Apple.
Score: 4 Votes (Like | Disagree)

TheRealTVGuy
This is GREAT! It's soo much easier to wager on games when they're ALREADY OVER AND DONE WITH.
Score: 3 Votes (Like | Disagree)
Read All Comments