Apple is planning to introduce its long-awaited next-generation Apple TV in September, reports Buzzfeed's John Paczkowski. According to sources familiar with Apple's plans, the new set-top box will be unveiled in September at the same event where Apple will unveil the next-generation iPhone 6s and 6s Plus.

As has been previously rumored, it is said to include an A8 processor, a touch-pad based remote that's "drastically improved" compared to the current version, a new operating system that supports a full App Store, developer APIs, and Siri voice control, and more on-board storage to accommodate apps. Physically, the Apple TV will take on a new, slimmer look. 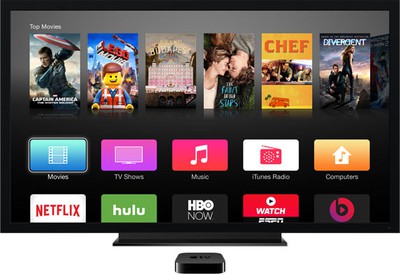 Apple will not be introducing its rumored television service at the same time, with sources telling Buzzfeed that the Internet-based streaming service could possibly launch in late 2015, but 2016 is more likely. Current rumors suggest Apple's television offering will bundle approximately 25 channels and cost between $30 to $40 per month.

Apple was widely expected to introduce both its new Apple TV and its upcoming streaming television service in June, at its annual Worldwide Developers Conference, but the two products were not ready for launch at that time. Apple postponed its release of the set-top box because it was "not ready for prime time" and held off on the television service because deals were not completed.

Apple has not introduced a revamped version of its Apple TV since 2012, so an updated set-top box with App Store support and other features will be a major change from the platform that we know and use today.

RoelJuun
Heard that one before...and before...
Score: 58 Votes (Like | Disagree)

godslabrat
How is this any different than the six other times i've heard this in the last three years?
Score: 40 Votes (Like | Disagree)

BrettApple
Poor developers these days. They've got apps to write for watches, TVs, phones, tablets, desktops, convertibles, fridges, and whatever else you want to stick an LCD on. Pretty incredible.
Score: 26 Votes (Like | Disagree)

Ready for the remote! The current one gets lost too much.

Agreed, but don't like the idea of it being touch-based. I don't want to have to look at it.
Score: 22 Votes (Like | Disagree)

McFreggle
Although I'm excited for the new Apple TV, I don't like the idea of a touch based remote. The current remote is such a nice example of the Keep It Simple philosophy that made Apple famous, and that's getting more and more lost each day... :-(
Score: 19 Votes (Like | Disagree)
Read All Comments

Friday May 14, 2021 11:52 am PDT by Juli Clover
Following the discontinuation of the iMac Pro, Apple also appears to be discontinuing Space Gray "Magic" accessories that it sold separately alongside the iMac Pro. The iMac Pro was the only Space Gray Mac, and Apple designed special matching accessories for it. The Space Gray Magic Mouse 2, Magic Keyboard, and Magic Trackpad all now say "While supplies last" in small wording at the bottom...
Read Full Article • 321 comments

Saturday May 15, 2021 11:08 am PDT by Juli Clover
Twitter has been working on some kind of subscription service since last summer, and Jane Manchun Wong, who often digs into new features coming in apps, has shared details on just what Twitter is exploring. Twitter's subscription service could be called Twitter Blue, and at the current time, it's priced at $2.99 per month. There will be a "Collections" section that allows users to save and...
Read Full Article • 103 comments