Details on Intel's upcoming 15-watt 6200U - 6600U Skylake processor lineup were shared today by Fanless Tech, giving us a look at what we can expect from the processors that will likely be used in Apple's next MacBook Air update. 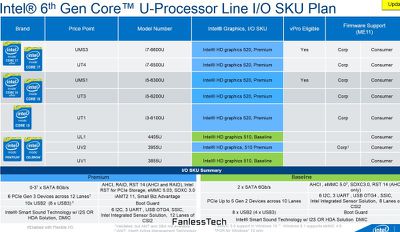 Click to view larger version
The 2.3GHz i5-6200U and the 2.4GHz i5-6300U chips are appropriate for the lower-end MacBook Air models, while the 2.5GHz i7-6500U and the 2.6GHz i7-6600U would be used in the higher-end MacBook Air models. All four chips include Intel HD 520 graphics. With Skylake, Intel has opted to simplify its graphics naming scheme, adopting 3-digit numbers instead of 4-digit numbers.

Click to view larger version
It is not clear when Intel plans to release the Skylake chips appropriate for the MacBook Air, but with full specs now available, it seems launch is imminent, perhaps planned for next week's Intel Developer Forum.

According to the information available, 28-watt chips appropriate for the 13-inch Retina MacBook Pro will not be launching until 2016. Launch dates are equally unclear for the rest of the Skylake lineup, as today's leak only covers chips that would be used in the MacBook Air.

nepalisherpa
Give me 11" Air with Skylake and retina display, please!
Score: 7 Votes (Like | Disagree)

Makosuke
It's not going to happen, but boy do I wish Intel would do something about their confusing naming schemes.

It was bad enough that we're now up to six generations of "Core i3/5/7" processors, the only way to differentiate between which is a somewhat random part number that means nothing unless you look it up in Intel's Ark, or an arbitrary code name that isn't printed anywhere on the box.

Now they've dropped a zero from the GPU model numbers they've been using for years, which adds additional confusion to anybody who doesn't actively follow these things. "No, no, that's a 520, which is newer and much faster than a 5200."

It's not that the information is impossible to come up with in most cases (apart from computers that come with a "Core i5" CPU without specifying in any way what generation or model it is), but it's needlessly confusing, particularly for the not-wildly technical. "Well, yes, they both say "Core i7" on them, and the GHz number is the same, but this one is way faster because it's actually three generations newer." or "Yes, they both say "i5", but this one has two cores and is a low-power mobile part, while this one has four cores and is a high-power desktop part. And also the generations are completely different."

Even Apple, masters of opaque product names, has a model year associated with each "iMac", has neatly sequentially numbered A-series processors, and their arbitrarily-named OSes have a simple version number to make it clear.
Score: 7 Votes (Like | Disagree)

It is a well-known fact that Intel hates money.
Score: 4 Votes (Like | Disagree)

Saturday May 21, 2022 9:00 am PDT by Hartley Charlton
With around four months to go before Apple is expected to unveil the iPhone 14 lineup, the overwhelming majority of rumors related to the new devices so far have focused on the iPhone 14 Pro, rather than the standard iPhone 14 – leading to questions about how different the iPhone 14 will actually be from its predecessor, the iPhone 13. The iPhone 14 Pro and iPhone 14 Pro Max are expected...
Read Full Article • 362 comments