KGI Securities analyst Ming-Chi Kuo today provided more information on the launch of the next series of iPhones, the so-called "iPhone 6s" and "iPhone 6s Plus," noting that mass production on the smartphone line will begin in late August, according to Taiwan's Central News Agency [Google Translate] (via GforGames). The production ramp-up will reportedly come roughly 1-2 weeks later than originally expected, but the change should not affect Apple's launch plans, which are anticipated to involve a mid-September debut as has been typical for the past several years. 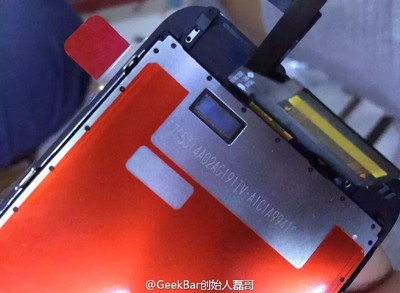 iPhone 6s display assembly
The analyst notes that Foxconn is manufacturing 60 percent of all iPhone 6s models, with Pegatron taking the remaining 40 percent. Foxconn will reportedly handle all of the manufacturing for the larger-screened "iPhone 6s Plus."

Components for the iPhone 6s such as A9 chips and Force Touch-equipped display panels have been said to have been in production for several weeks now, and all of these components will be brought together at Foxconn's and Pegatron's facilities for final assembly.

Apple is facing increasing demand for the new line of iPhones, and a few of Foxconn's factories -- such as the one in Zhengzhou -- are rumored to be ramping up overtime for employees heading into mass production just to be able to meet demand. GforGames also notes that slowing production of the iPhone 6 line ahead of the updated models is providing some breathing room for the manufacturing and production of the new iPhones.

Earlier in the year, Kuo predicted a mid-to-late August time window for mass production on the new line of iPhones, so today's 1-2 week delay still falls inside the previous estimate. Recent rumors regarding the "iPhone 6s" and "iPhone 6s Plus" include the addition of Force Touch, a slightly thicker body to accommodate the new technology, camera improvements and perhaps a rose gold or pink color option.

Pelea
in other news, the sun is expected to both rise and fall tomorrow
Score: 11 Votes (Like | Disagree)

NMBob
That takes a bit of guts to take a picture of a part with a big ol' serial number on it. They probably know which mine the metal for that piece came from.

In other news, I hope the Sun holds out at least until dark. I've got a lot to do on Saturday.
Score: 4 Votes (Like | Disagree)

Thanks for the heads up on the Sun failing tomorrow, heading to my bunker...
Score: 3 Votes (Like | Disagree)
Read All Comments

Tuesday May 11, 2021 11:56 am PDT by Joe Rossignol
Last month, Apple introduced a new iPad Pro with the same M1 chip found in the latest Macs, and early benchmark results indicate that the M1 iPad Pro is over 50% faster than the previous-generation iPad Pro. Based on five legitimate Geekbench 5 results (here's the fifth) for the fifth-generation 12.9-inch iPad Pro with the M1 chip, the device has average single-core and multi-core scores of...
Read Full Article • 246 comments