Apple's Back to School Sale Kicks Off Online, Expands to Additional Countries

Apple introduced its 2015 Back to School promotion in late July, but it was initially limited to Apple's Retail Stores in a few select countries. As of today, the Back to School Program is also available for purchases made online, and it has expanded to additional countries. 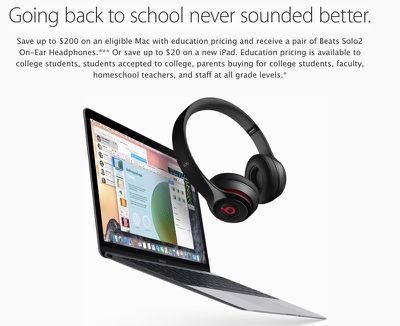 Eligible Macs include the iMac, MacBook, MacBook Pro, MacBook Air, and Mac Pro. The Mac mini, refurbished Macs, iPads, and iPhones are excluded from the 2015 Back to School program.

When an eligible Mac is added to a shopping cart, buyers will have the option to select their free Beats Solo2 headphones in Gloss Black, Gloss White, Gloss Blue, Gloss Pink, Gloss Gray, Gloss Red (Product RED), Gold, Silver, or Space Gray. Students hoping to take advantage of the $200 discount on Wireless Solo2 headphones will need to add them to the cart manually.

This year's Back to School promotion is a significant deviation from the deals offered in past years. Previously, Apple provided iTunes or Apple Store gift cards in amounts between $50 to $100 with the purchase of a Mac, iPhone, or iPad.

Apple's Back to School promotion will run until September 18, 2015.

Porco
I predict a surge in the number of Beats headphones on eBay soon... !
Score: 14 Votes (Like | Disagree)

They should have just offered the headphones. By comparison, the iPad deal is kind of pathetic. So pathetic that the article does not even mention it...
Score: 7 Votes (Like | Disagree)

You guys really don't understand that getting the headphones is somewhat of a decent deal, do you?

mostly shows how valuable those headphones are or in this case actually NOT
Score: 7 Votes (Like | Disagree)

brianbunge
I love how people bitch about free stuff.
Score: 6 Votes (Like | Disagree)

texastravelingman
Who cares about a pair of headphones? As a college student I would rather have the discount on the hardware or at least the gift card!! Apple is taking the cheap way out as the headphone probably have a very low cost to manufacture!

Stop going cheap on the discount just because of your name!
Score: 6 Votes (Like | Disagree)
Read All Comments