Following the release of several photos of a claimed display assembly for the "iPhone 6s" over the weekend, Macfixit Australia has shared additional images of what appears to be the same display assembly, further suggesting the leaked images to be real internal parts for the next-generation iPhone. 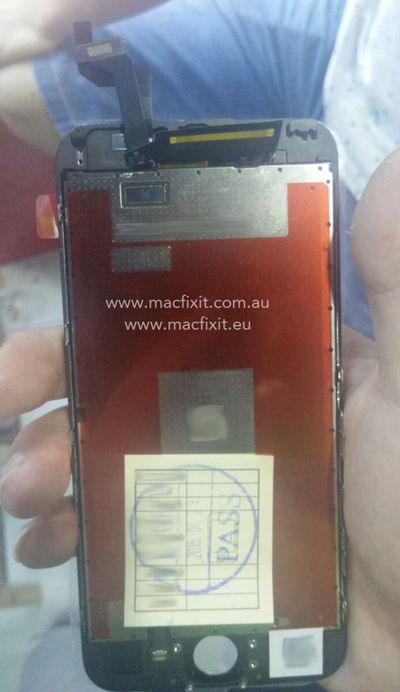 One of Macfixit's photos includes a quality control label showing a pass date of July 29, which, if legitimate, would put the assembly in a correct time frame for Apple's traditional September iPhone launches. The image also appears identical to those released over the weekend by repair company GeekBar, with the same possible cutouts for a taptic engine to fuel Force Touch and a slightly thicker frame.

A few possible third-party case manufacturer design renders have also been shared by uSwitch and Nowhereelse.fr's OnLeaks channel, backing the theory that this year's iPhone line will be slightly thicker than the iPhone 6 and iPhone 6 Plus. Theories that support Apple's reasoning behind increasing the iPhone's thickness -- other than the inclusion of Force Touch -- include attempts to avoid another "Bendgate" controversy from last year with a stronger body. Height and width of the iPhones shown in the renderings are also marginally larger than the measurements for the current lineup.

The iPhone 6S Plus, which was the model most often cited in the so-called 'bendgate' scandal, has also been body-building. It’s gone from 7.1mm thick to 7.3mm, we were told.

The renders also suggest that the "iPhone 6s" could be missing the slightly protruding camera found on the current lineup, perhaps made possible by the slightly thicker body. The "iPhone 6s Plus" renderings, however, continue to show a protruding rear camera. uSwitch does note the renders could simply be incomplete, so Apple's plans for rear camera designs remain unconfirmed. Otherwise, the site notes an overall similarity between generations, with a home button, volume rockers, lock switch, and screen size that make the new phones "largely indistinguishable" from last year's models.

Even with the possibility of a thicker frame, the size increase of the so-called iPhone 6s would be small enough to allow most accessories and cases to function with both generations of the device. News and rumors regarding the "iPhone 6s" and "iPhone 6s Plus" have begun to proliferate in the past few weeks, and will no doubt continue to do so as we head into the iPhone launch season.

The difference between OLED and LED is simply lighting. Blacks are washed out on LED but OLED draws a lot more power if the whole screen is bright or white. Brightness is also OLED's weakness.
I find nothing wrong with the retina LED displays on my iPhone 6. It produces excellent picture quality.

"Comparison with LCDs and the iPhone 6 and 6 Plus
LCDs and OLEDs are the two leading mobile display technologies. The technologies are significantly different and each one has its own inherent strengths – and both continue to evolve and improve independently.


You can directly compare the data and measurement results for all four of these displays in detail by using a Tabbed web browser with our comprehensive Lab measurements and analysis for each of the displays. For each Tab click on a Link below. The entries are mostly identical with only minor formatting differences, so it’s easy to make detailed side-by-side comparisons by simply clicking through the Tabs."
Score: 9 Votes (Like | Disagree)

Benjamin Frost
Just get rid of the bezels and put the 4.7" screen into the form factor of the iPhone 5.

Dave245
It seems every year there are more and more leaks, sometimes I wonder if Apple are doing it on purpose. I'm not complaining it helps me make my mind up if it's something I want. This year however I'm more looking forward to iPad Pro leaks (if it exists and is being released this year).
Score: 5 Votes (Like | Disagree)

Agreed. The display on my s6 edge is far superior than my iPhone 6 plus. OLED is just beautiful. they probably won't change the display until iPhone 7 though.

I think people's concern with OLED was the color saturation. But with s6 you can adjust the screen modes the colors aren't so saturated.

But I actually prefer the colors to be bright and bold.

My concern with OLED is burn-in, which has happened to ALL of my Android phones, including the ones that had displays that the manufacturer, and the net, and forum users said would not. With the iPhone, this would be a huge "do not buy" red flag for me, as there is no message notification LED, requiring that I leave the display on all the time while plugged in, so I don't miss messages. Combined with the color shift over the course of the year in all OLED displays, from blue to yellow, the forum here would be a cluster for years, of never-ending threads about OLED issues. I have LCD devices over 10 years old that still look as good as when they were new. ALL of my OLED devices look like puke now.
Score: 5 Votes (Like | Disagree)

While currently enjoying my iPhone 6 Plus, you all can have the 6S, because when the iPhone 7 comes around I'll be hitting that one up. It will undoubtedly be the next milestone of the iPhone.

This. 10th generation iPhone; is going to be amazing.
Score: 4 Votes (Like | Disagree)