Apple Watch online sales in the United States are estimated to have totaled 3,039,353 at an average price of $505 through July 10, exactly three months after Apple began accepting pre-orders for the wrist-worn device, according to the latest data from market research firm Slice Intelligence obtained exclusively by MacRumors. 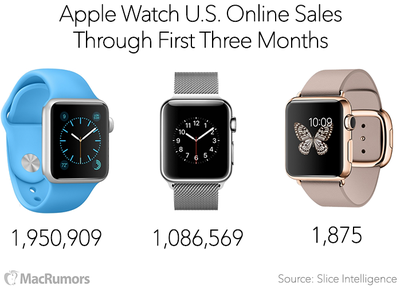 Apple has also sold 1,875 Apple Watch Edition models to date, at an average price of $13,700, according to Slice Intelligence. The 18-karat gold Apple Watch models, seen on the wrists of celebrities such as Beyonce, Drake, Kanye West, Katy Perry and Pharrell Williams, cost between $10,000 and $17,000 in the U.S.

Slice Intelligence's data does not include Apple Watch sales in Australia, Canada, China, France, Germany, Hong Kong, Italy, Japan, Mexico, Singapore, South Korea, Spain, Switzerland, Taiwan and the United Kingdom, nor does it account for walk-in purchases made through the Apple Store.

The research firm previously estimated that Apple received 1 million Apple Watch pre-orders at launch, averaged 30,000 Apple Watch sales per day in late May and had topped 2.8 million total Apple Watch sales as of mid June. It also found that around 17% of online shoppers buy at least one extra band for the Apple Watch.

Given that Apple has not publicly disclosed any official Apple Watch sales figures, and will be grouping the wrist-worn device under its "Other Products" category in quarterly earnings reports, the accuracy and methodology behind the Slice Intelligence data has been called into question -- so we went looking for answers.

MacRumors spoke with Slice Intelligence's Chief Data Officer Kanishka Agarwal and VP of Marketing and PR Jaimee Minney to learn more about Slice Intelligence's methodology. The details below should provide a better understanding of how its Apple Watch sales estimates were calculated over the past three months.

Slice Intelligence tracks e-receipts from 2.5 million online shoppers in the U.S., which it claims is the largest panel anywhere, that sign up for the company's value-added services such as Slice and Unroll.me. Slice, for example, is a free app for tracking packages, receipts, price drops, product recall alerts and more.

Slice Intelligence also offers an API for developers to provide users with their purchase history and can aggregate e-receipt data through some of these third-party apps and services. The research firm claims to be the only one to provide direct measurement of all digital commerce activity and customer loyalty.

Slice Intelligence says it is "very confident" that its Apple Watch sales estimates are within proximity to what Apple has actually sold, noting that its data is measured against third-party sources such as Amazon and the U.S. Department of Commerce with between 97% and 99% accuracy. Slice and Apple have not been in contact.

The research firm claims to have a diversified pool of consumers that is highly representative of the online shopping population and balanced to eliminate biases. Agarwal says that his firm's panel lines up nicely with the overall market and is supplemented by detailed competitive insight and data from clients.

MartinAppleGuy
And didn't android wear sell only 720,000 in the whole of 2014? So several different manufacturers, and 4 times the amount of time and Apple still sold more than 3 X the amount of watches. Yeah, total failure :rolleyes:
Score: 38 Votes (Like | Disagree)

If we could make calls from our watch without having to talk to stupid Siri, i bet it would be a LOT higher :mad:

Clearly you've never used one... because you can make calls from your watch without talking to Siri. Either by using the Phone app, or by using the Friends button.
Score: 27 Votes (Like | Disagree)

Apple Watch online sales in the United States are estimated to have totaled 3,039,353

ninethirty
2 harsh realities need to set in for the people of this forum.

1. People just aren't that into wearables (at least in their current state).
2. Apple just didn't do their best on this one.
Score: 22 Votes (Like | Disagree)

Total numbers alone on a new product, esp from a company with a strong company mean very little when it comes to judging if it's a hit of a miss as a product.

It's how those numbers break down.

1: 1st month 2.5 million sold (Apple fans buying them up)
2: 2nd month 0.4 million sold (many have now got them and slowing down)
3: 3rd month 0.1 million sold, all those who wanted one have got them, and most general people are not interested

Potential failure as a product.

this product is really catching on, starting to fly, more and more want them, it's a success as a product.

As I say, meaningless unless you know sales/time
Score: 17 Votes (Like | Disagree)

Rogifan
Why is Mac Rumors so obsessed with Slice Ingelligence? When in the past have they ever predicted sales of other Apple products and done so accurately? And since their data doesn't include all launch countries how accurate can it be anyway?
Score: 15 Votes (Like | Disagree)
Read All Comments