Apple will announce a refreshed lineup of iPod touch, iPod nano and iPod shuffle portable media players around July 14, according to usually reliable French website iGen.fr. The report claims the new iPod touch (codenamed "N102") should be a more significant update, likely including a bump to a 64-bit A-based processor, while the iPod nano ("N31A") and iPod shuffle ("N12D") may be refreshed with new colors only. 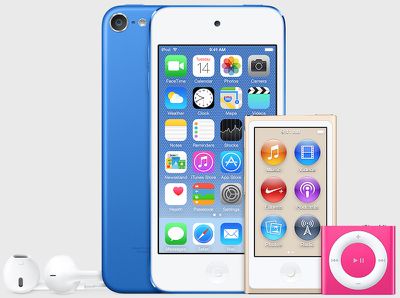 iPods in unreleased colors spotted in iTunes 12.2 earlier this month
iPods in unreleased colors were spotted in iTunes 12.2 earlier this month, including a darker blue for the iPod touch, a new gold or beige color for the iPod nano and a brighter pink color for the iPod shuffle. Notably, a few eagle-eyed readers noticed that the Calendar app on the iPod touch displays "Tuesday" and "14," which lines up with Tuesday, July 14 and information shared by iGen.fr's sources.

Update 1 PM Pacific: iPod touch shipping times have slipped to 3-5 business days on the Apple Online Store in the U.S. and Canada.

I'm not against it but does it make sense to mount 64-bit CPU on an iPod?

If that iPod is expected to run the same OS as Apple's other 64-bit products, absolutely.
Score: 38 Votes (Like | Disagree)

iPods are mostly used by the younger age group
Score: 23 Votes (Like | Disagree)

ThePimento
Here's to hoping for a 128GB model. Since they killed the Classic they need something for those of us who have large libraries. Though they probably won't since you could pay to stream everything from Apple Music. *sigh*
Score: 21 Votes (Like | Disagree)

diddl14
Best evidence that the rumour is true...

AngerDanger
Here is a GIF comparing the current and potential colors:

I'm digging the blue, but nothing quite compares to the colors of the iPod nano chromatic. ('http://www.omlazeni.cz/shared_files/uploaded_new/0/6727/595011_1_bazar.jpg')
Score: 12 Votes (Like | Disagree)
Read All Comments