Apple is planning to introduce new co-designed packaging for many of the third-party accessories that it sells in its stores, according to retail store information shared by 9to5Mac. Apple has reportedly been working with several third-party accessory manufacturers on packaging design, helping to create a new look for boxes to better fit in with the packaging that's used for Apple's own products.

Companies participating in Apple's revamped packaging efforts include Tech21, Sena, Incase, Mophie, Logitech, and Life Proof. When these products are sold in Apple Stores, they'll be sold with simple, no-frills white boxes with minimal labeling as seen in photos. 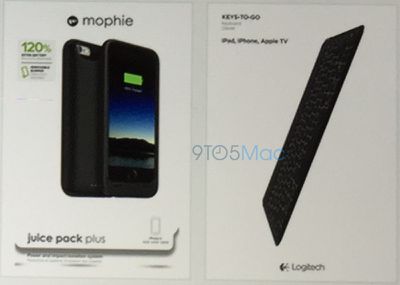 According to the memo, the packaging will be mostly white to match the Mac, iPhone, and Apple Watch boxes, while they will also include simpler fonts, new photography, higher-quality materials, and more consistent compatibility labeling. This shift is yet another in a string for third-parties that has included new environmental guidelines and a ban on leveraging early iPhone leaks.

Apple's new head of retail, Angela Ahrendts, has been working to revamp the Apple Store experience in recent months, streamlining the purchasing process and reimagining both product discovery and customer-employee interactions. The packaging redesign is part of a larger effort to overhaul Apple's in-store accessory lineup, limiting the number of products that are sold for a more refined look.

News of the revamped packaging was first shared by Mac Otakara [Google Translate] in June, and a sneak preview of what the accessory sections of Apple's retail stores might look like can be seen at the company's Upper East Side store in New York.

caliguy
A little diversity is a good thing.

Corrode
Apple's packaging is second-to-none. This is good news for those lucky peripheral companies. Hopefully it means less overall materials use so it can be good news for the environment too.
Score: 12 Votes (Like | Disagree)

Apple Knowledge Navigator
Would I sound foolish for thinking that Apple retail stores have become almost too upmarket? I know, high standards are something that every company aspires for, but to me they're just so sterile and unfriendly (that applies to both the staff and the surroundings).

I'm from U.K - would love to hear others thoughts.

Dark Void
Lol @ that one customer in that store being grilled and surrounded by 4 employees in a candid stance.

I think most people who can read and deduce what's inside the box from the photograph on the outside of the box will not have any trouble.

You grossly underestimate the stupidity of the average consumer. Besides, when people are in a hurry, mistakes happen. And you're talking about tech gadgets, you can hardly deduce everything about it from a mere picture. Specs matter.
Score: 6 Votes (Like | Disagree)

Lol @ that one customer in that store being grilled and surrounded by 4 employees in a candid stance.