Following several months of development, Tapbots today released Tweetbot 2 for Mac with a major visual overhaul inspired by the flat design of OS X Yosemite and more consistent with the iPhone version of the Twitter client. Tweetbot 2 for Mac is available as a free update through the Mac App Store for existing Tweetbot users and has been discounted to $12.99 from its regular $19.99 price for the first time ever. 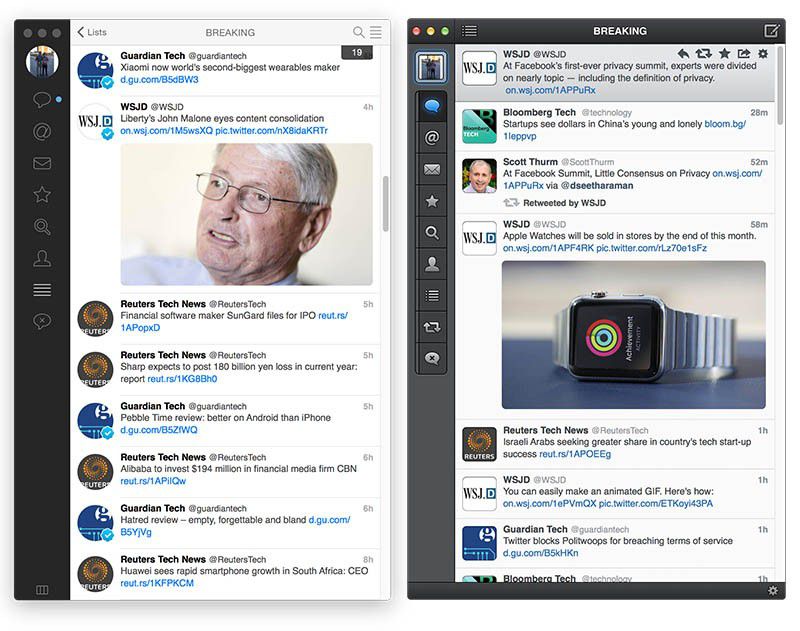 The major visual changes in Tweetbot 2 for Mac include flatter tabs and controls, redesigned user profiles with a new "Recent Photos" section, a new iOS-like user interface when clicking on or viewing the details of individual tweets, circular profile photos, profile photos for retweets and iMessage-like chat bubbles for direct messages. Overall, the software has a more simplified and clean appearance.

Tweetbot 2 for Mac also features a new timeline search option, verified account badges and improved list organization. There is a new three-pane toggle in the bottom-left corner that makes it much more convenient to open lists in a new window or column, view all of your lists or search Twitter. A list can easily be removed or detached into a separate window by right clicking its title bar at the top.

My first impressions of Tweetbot 2 are overwhelmingly positive, as the updated Twitter client has provided a faster and more fluid experience during my testing. The original version of Tweetbot for Mac would occasionally crash on me, and resizing the app would sometimes result in choppiness or lag, but I have not been able to reproduce either of those issues using Tweetbot 2.

danmcq
They need to update their iPad app.
Rating: 6 Votes

redsoxunixgeek
The best Twitter client ever. Awesome for Multiple Accounts, the RegEx filtering in the App is amazing, and it is just a slick product. They might not be the fastest when it comes to kicking out their code, but they do a damn good job with the products they release.
Rating: 5 Votes

BeSweeet
Pretty underwhelming update IMO, especially given how long it took to release. Remember the new version of Tweetbot for iPad? Neither do I.
Rating: 4 Votes

J@ffa
It's a free update!? Yay! Definitely would've paid for it. Fingers crossed an iPad version isn't too far behind.
Rating: 3 Votes

That or the stock twitter app would probably suffice if you are a very basic twitter user, IMO.

But I hate ads, and I think developers should get paid for good work. I think Twitter really screwed developers over with their limited tokens system, I really like the tweetbot app on my iPhone, and I want the company to continue supporting it for the iPad as well.


Unfortunately the developers need to charge a relatively large amount because Twitter screwed over third party developers with limited tokens. This means there is only a limited number of users they can sell it to, so instead of 1,000 users paying $2 it is much better for them to have 100 users paying $20.

The developers are awesome, it is way better than the official app and it means no ads so it is worth it if you value quality over cost.
Rating: 2 Votes

Does anyone know if Tweetbot sends desktop notifications on each and every tweet like the Twitter app? Or at least, can you enable notifications if a user tweets? If so, I might just buy it.

I keep using the official Twitter app on OS X just because I like the desktop notifications on every tweet. And yeah, I know this sounds bad, but I only follow a handful of people, and notifications on their tweets are really great.


Yes although it warns you first that it is usually a very bad idea!

Crosscreek
I use TweetDeck and it's free. $13 lol.
Rating: 2 Votes

WordsmithMR
I've been a really happy user with TweetBot. They updated their iOS version very quickly once Twitter changed their retweet/quote... Been waiting a while for the OS X version to update... And it doesn't seem like they even added that feature -_- That is very disappointing. I mean overall the app is great, never crashes, and haven't had any issues with multiple windows being opened, however I do wish they would update the OS X version to work as good as the iOS.

Edit: Well just as I hit send on this I got my first crash ever with the app >_>