'Tweetbot 2' Yosemite Update in the Works, Will Be Available for Free

Tapbots, the company behind the popular Tweetbot Twitter client, today tweeted a tantalizing preview image of Tweetbot 2 for Mac, which has received a Yosemite-style redesign.

Based on the photo, Tweetbot 2 adopts many stylistic elements from Yosemite, allowing it to blend in well with the updated operating system. It features a flatter look with redesigned icons, plus a translucent navigation bar. It also uses circular profile photos, much like Tweetbot for iPhone.

According to Tapbots, the Yosemite update has been "more work than anticipated," which explains why the Mac app has yet to see an update even though Yosemite launched in October. The company has also confirmed that Tweetbot 2 for Mac will be a free update. 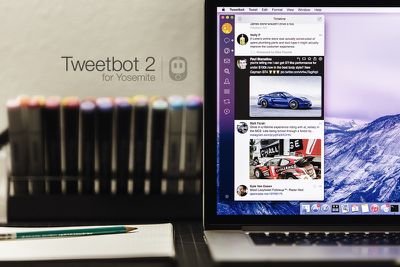 Tweetbot for Mac made headlines last week when it temporarily disappeared from the App Store, leading some to speculate that it had reached its Twitter token limit, a restriction Twitter places on the number of users allowed for third-party Mac clients, but the disappearance was only temporary and Tweetbot returned to the Mac App Store after a day of absence.

Though Tapbots has confirmed that Tweetbot 2 for Mac is in the works, the company has not divulged a possible release date for the software. There is also no new word on a new iPad app, which has not been updated since June of 2014 and has not received an iOS 7 redesign.

Tweetbot for Mac can be downloaded from the Mac App Store for $19.99. [Direct Link]

petvas
Tweetbot is really a nice client, but the developer has been extremely slow with updates for the iPad and OS X versions. I have no interest in investing in a software that has such slow updates.
Score: 12 Votes (Like | Disagree)

It's a two person team. Give them a break


I did. I stopped using their product.
Score: 10 Votes (Like | Disagree)

Tweetbot is really a nice client, but the developer has been extremely slow with updates for the iPad and OS X versions. I have no interest in investing in a software that has such slow updates.


Seriously, the iPad Tweetbot is LONG overdue for an update.
Score: 9 Votes (Like | Disagree)

Jessica Lares
The Twitter limitations are what keeps it at $19.99. They cannot afford to have the casual users.
Score: 9 Votes (Like | Disagree)

Art0fLife
Honestly can't understand the delay on the iPad update for Tweetbot. It's been needed much longer than the one for Mac. I get that they are a small team but their priorities are all ****ed up here. It's far more out of date than the one for Mac. It was promised first, will cost money. I certainly can't see how something as useless and unnecessary as Calcbot for Mac became a priority over it. While I understand that loyal fans will want it just because "Tapbots", they would certainly make far more off of TB3 for iPad than Calcbot for Mac so it wasn't even a wise business choice. I realize that FullForce on a Jailbroken iPad with the iPhone version of TB3 will do Tapbots job FOR them, but I hate jailbreaking just for that.

It's nice that they are making it a free update. I don't even care about the cost for Mac because it's worth it, and it's necessary to keep the casual users away because of the token limits. But at this rate the iPad version better be free. It's more than a year late, the way they act when asked about it makes it seem like a case of vaporware.

So sick of lazy developers lagging so far behind on iPad updates. Had to ditch Alien Blue in favor of iAlien because of it, and if Twitterrific would just have a useful mute feature instead of "muffle" I'd say **** it to Tapbots and this nonsense. Can't believe I ever spread the word about these guys and raved about their apps and support. From now on if the iPad version is more than a month behind the iPhone version or Mac version of any given app, they aren't getting my money for any device.
Score: 7 Votes (Like | Disagree)

Should I feel any sympathy for startup developer, that became (by all indications) very successful, but did nothing with the money and reputation to evolve into a serious company with at least a small team able to keep up with general pace of competition/ecosystem? I don't think so. :mad:

They ar VERY BAD at supporting/updating existing stuff and extremely slow in general. I have purchased about every app they made. But over the years they have absolutely lost my trust.

This. They started out well. They were on top of things, timely updates, cared about products and really made a name for themselves. Then they got lazy as ****, and are trying to get by on that reputation alone. They break promises to customers at almost every turn and are insanely slow with releases. They are even flat out rude and hostile as far as support goes (recent experience) and don't even bother asking them about updates. iPad doesn't even have a fully adapted version for iOS 7 let alone iOS 8 and iOS 9 is around the corner. With no indication they are even really working on it. It's two release cycles behind the competition, more than a year late from their promise, and will likely be 3 or maybe even 4 release cycles behind at the pace they are going. Watch is about to come out and watch them shelve an update again for some other utterly useless thing. I wouldn't be surprised to see Tweetbot for Watch before an update to iPad or even Mac.

They don't even update basic bugs and functionality properly for the Mac or iPhone versions, their "cash cows". They left all their other apps completely in the dust. And rather than working even on versions that actually bring them profits (iPad TB3, Mac TB) they come up with Calcbot for Mac, something that there was no need, wish, or desire for. It doesn't even make business sense. Tweetbot may be more work but they'd sell a damn site more TB3 for iPad for example, than they ever will Calcbot for Mac. It's perfectly reasonable for customers to be pissed off. If they don't know how to keep pace or do the work timely, they either should hire people who do, or stop making promises to customers and using words like "soon" or "very soon" or "almost there", followed a year later by "OMGZ please leave us alone cuz its hard".

It would even be better for TB3 iPad or their older apps to just say "We have decided to stop support and future versions for these, sorry" rather than "Soon" for years on end. Vaporware is a terrible way to treat paying customers.
Score: 6 Votes (Like | Disagree)
Read All Comments