The accessory market for the Apple Watch exploded almost immediately after the wearable was announced back in March, with stands specifically becoming the popular announcement of well-known third-party accessory companies like Twelve South and Mophie. Although most of the stands won't break the bank, some of the cheapest start at around $30, and some of the higher-end alternatives can go as high as $130.

With monetary savings in mind, a few enterprising individuals around the internet have begun to showcase their own homemade alternatives to the big-name Apple Watch stands. Made using materials like LEGO and even a 3D printer, the homemade stands not only look functional but, of course, offer a more unique and personal take on charging Apple's new wearable device.

Designed and built this Apple Watch stand all by myself like a big boy pic.twitter.com/YADEd0wunY — ⚡️ Conasaurus Rex ⚡️ (@ConaKBO) May 31, 2015

One of the go-to Apple Watch stand material for homemade construction is LEGO, unsurprisingly, with users posting on Twitter and in the MacRumors forums a few noteworthy constructions perfect for the nightly charging required by the wearable. Ranging in diversity from a highly detailed Guardians of the Galaxy themed design to simple no-frills constructions, those interested may not be able to perfectly re-create their favorite designs, but should no doubt feel a burst of inspiration from looking at others' builds.

My Apple Watch charging stand is better than yours ;) #iamgroot #lego @JamesGunn pic.twitter.com/mJRl9jvQmg — I Am Dan. (@danactual) May 28, 2015

Over in the forums, a few members have showcased unique LEGO creations, as well. A few designs focus on pop culture themes like Minecraft or Star Wars, but others have decided to build their own custom blueprints, as well. One user even took it a step further and crafted a matching Watch/iPhone set.

Although far less popular than the easy-to-obtain LEGO bricks, one lucky MacRumors reader has been able to use a 3D printer to design and print out their own personal Apple Watch stand. The resulting product is arguably a bit rudimentary and rough around the edges, but undeniably cool as an alternative charging method for the Apple Watch. The 3D printed stand was designed with a slot on the back of the stand's neck and a hole at its base to pass the MagSafe charger, although the poster notes the exact dimension of the MagSafe puck was estimated due to the Watch's unavailability at the time of posting.

3D Printed Apple Watch stand by MacRumors Forum member Shacky
The stands showcased here today barely scratch the surface of the creative ideas and builds Apple Watch fans have taken to creating since its launch in April. If you've already built your own Apple Watch stand, or plan to in the future, be sure to share it with everyone in the Apple Watch accessories forum or by commenting below.
Related Roundup: Apple Watch Series 8
Tags: LEGO, Apple Watch Stands
Buyer's Guide: Apple Watch (Buy Now)
Related Forum: Apple Watch
9 comments

… perfect for the nightly charging required by the wearable.

It's interesting that this keeps getting stated as a given, but I've been wearing my Apple Watch at night since the first weekend. It typically only uses about 60% battery for a full day, and the tiny battery charges very quickly. I charge mine in the morning while I shower and get ready for work, and then again for a short while when I get home. Feels like a 24 hour device for me, and I'm really hoping we see sleep-tracking apps for it soon…

Love the idea of a lego stand though. The magnetic charger works well, but could do with being a bit stronger for when it's just lying on a soft surface (like my chair at home).
Score: 5 Votes (Like | Disagree)

whyamihere
I made mine using Instamorph with large washers as a weighted base! 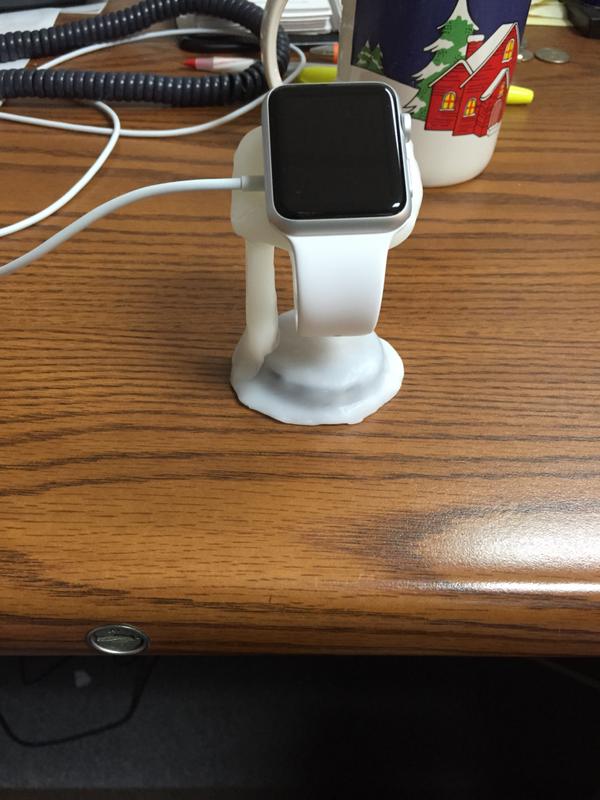 It's interesting that this keeps getting stated as a given, but I've been wearing my Apple Watch at night since the first weekend. It typically only uses about 60% battery for a full day, and the tiny battery charges very quickly. I charge mine in the morning while I shower and get ready for work, and then again for a short while when I get home. Feels like a 24 hour device for me, and I'm really hoping we see sleep-tracking apps for it soon…

Love the idea of a lego stand though. The magnetic charger works well, but could do with being a bit stronger for when it's just lying on a soft surface (like my chair at home).

Same here. I wear mine every weeknight cause I use the silent alarms to wake me up and not disturb my wife. I previously did it with Pebble and then Fitbit Surge. I hope they implement sleep tracking too. I charge my watch right after work and for a few minutes while before I hit the gym in the morning. Been working out well.
Score: 1 Votes (Like | Disagree)

perfect for the nightly charging required by the wearable

My iPhone 5 requires charging more often than my Watch. I have only two outlets at my nightstand. I charge my iPhone every night, and my Watch and iPad on alternate nights.
Score: 1 Votes (Like | Disagree)

peach23
Been watching the forums for a while looking for a stand but couldn't find one I liked enough to take the plunge and buy one. I liked the look of the Lego ones so I thought I'd throw this together from my sons old batman Lego, just hope he doesn't ask for it back anytime soon!

Friday November 25, 2022 2:58 am PST by Sami Fathi
An Apple engineer has addressed the lack of lossless audio support in the second-generation AirPods Pro in a new interview. Current Bluetooth technology in the AirPods lineup means that Apple's audio products do not support Apple Music Lossless audio. Apple has previously hinted that it may develop its own codec and connectivity standard that builds on AirPlay and supports higher quality...
Read Full Article • 189 comments