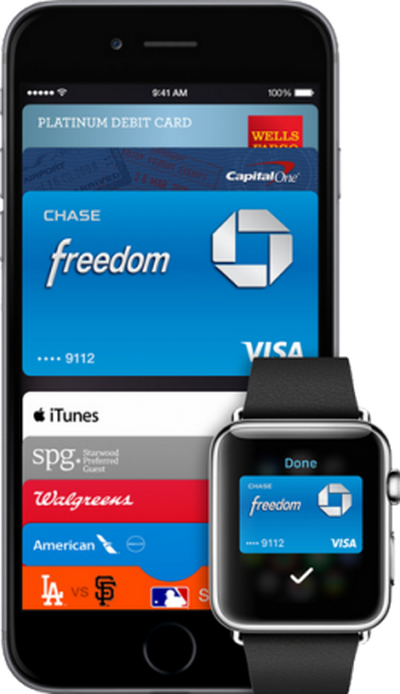 Apple plans to introduce a new rewards program for Apple Pay at WWDC next month, reports The New York Times. In a piece covering upcoming mobile payment upgrades from Apple and Google, the site suggests that Apple will announce details about enhancements to Apple Pay at its Worldwide Developers Conference in June.

Few details are known about the rewards program that Apple plans to implement, but it is said to offer "perks" to customers who make purchases using Apple Pay.

But analysts have noted that a missing piece from Apple Pay was a rewards program to keep users returning to participating merchants. People familiar with Apple Pay said that next month, Apple will announce such a program offering perks to consumers who make purchases with the service, though they declined to reveal details.

There have been rumors about a rewards program for Apple Pay since before Apple Pay launched in October of 2014. In September, a report suggested Apple was working on a pilot program that could see it partnering with multiple third-party retailers to form an Apple Pay loyalty program.

Further rumors suggested the system could tie into iAd, delivering targeted ads to consumers via iBeacons and Bluetooth LE with coupons for free or discounted products, but it is not clear if that's how Apple's finished rewards program will work.

Upcoming Apple Pay competitor CurrentC offers a built-in rewards program that's able to incorporate loyalty cards and discounts for individual merchants, and CurrentC executives tout this as one of the major differentiating features of its system. With its own rewards program, Apple Pay will be better situated to compete with the reward-based features of CurrentC.

It is not known if Apple has plans to introduce additional Apple Pay features at its Worldwide Developers Conference, but it's possible that it could share details on an expansion of the service to additional countries like Canada. Canada is expected to be one of the first countries beyond the United States to gain Apple Pay support.

Ted13
CurrentC is DOA as it is.

With Target going to Apple Pay it pretty much leaves it as a Walmart only operation. Game is over
Score: 16 Votes (Like | Disagree)

Suffice to say, Apple Pay is a bust.

I use it every day. It works on the vending machines where I work and I can use my Apple Watch with my phone charging on my desk. It's pretty awesome in my experience.
Score: 15 Votes (Like | Disagree)

moxxham
And if only it would come to Australia! Every store I have been to for the past few years all have contactless now. Would actually be a little strange if they didn't have it to be honest! The technology is there...come on Apple, we is hungry for Apple Pay
Score: 14 Votes (Like | Disagree)

dagamer34
Whatever encourages more retailers to put in Apple Pay in their stores, fine by me.
Score: 13 Votes (Like | Disagree)

Suffice to say, Apple Pay is a bust.

(Thanks to non-compliant and greedy retailers.)


No it's not. Look, there are between 12-15 million points of sale in the USA. When the iPhone 6, and Apple Pay first came out, only 220 thousand had NFC terminals. Earlier this month, during the financial call, Cook stated that the number was up to 700 thousand. That's a pretty big jump.

By the end of the year, it's expected to be at 1.2 million, maybe more. It will take years before the transition is mostly done, and there will always be small businesses in out of the way places that won't accept it, until it's well used everywhere else.

So sure, we can call what Walmart is doing greed, if making more profit. And cutting out the middleman is considered to be greed.

But look, to be fair, a company's loyalty is to itself. It's supposed to come up with ways to maximize profits. So I have nothing against what they are doing. We can see that companies affiliated with the program are allowed to also accept other payment systems after a certain time, and that time seems to have come up for a number of Current C members.

So nothing lost.
Score: 12 Votes (Like | Disagree)
Read All Comments

Tuesday September 27, 2022 10:24 am PDT by Juli Clover
The most recent beta of iPadOS 16.1 expands the controversial Stage Manager feature to older iPads, allowing it to work with iPad Pro models that have an A12X or A12Z chip, according to information Apple provided to Engadget. The beta also removes the external display support from Stage Manager for the current time, with the feature set to return in a later iPadOS 16 update. Apple's...
Read Full Article • 264 comments