IFTTT's 'Do Button' and 'Do Note' Coming to Apple Watch

After a bit of re-branding and the launch of a trio of new apps in Do Button, Do Note, and Do Camera, IFTTT today confirmed that two of those experiences - Do Button and Do Note - will be coming to the Apple Watch when the device arrives to customers beginning next week.

Coming as a client update that will bring Apple Watch support, like many other apps before it, the two task-management apps will allow users to run their favorite "Recipes" from the simplicity of their wrist. Envisioned as a simple "If this, then that" equation, Recipes require a "Channel" (an app) and a "Title" (a command) to be executed properly. So users can, in essence, create a Button to post a picture quickly to a Facebook album, or share it to Twitter followers. 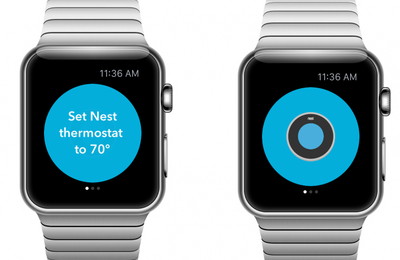 The advantage of having Recipes on the Apple Watch is interesting, as the Do Button specifically aims to introduce Apple Watch functionality to apps that haven't even confirmed first-party support for the wearable yet. Users will be able to control their Nest to a desired setting, or interact with a set of Hue Bulbs. Philips has confirmed a Hue Watch app is incoming, but has remained quiet on the actual launch window for the app.

While each interaction will be boiled down to basic on/off functionality thanks to Do Button - one can't go into Hue's deep color customization screen, for example - even the limited availability of such apps at the Watch's launch date is notable.

Available tomorrow, the IFTTT apps will give people the power to use the apps, services and devices they love, even if they don’t have Apple Watch functionality (everything from Gmail to Jawbone, Evernote, Nest and Facebook).

For example, use Do Button to turn your Nest thermostat to 70 degrees with a single tap, or to switch your lights on or off. With Do Note, simply dictate your request and tap to run your command – e.g. create a note in Evernote or quickly create an event in Google Calendar.

While Do Button lived mostly as an extraneous accessory to first-party apps on iPhone, the Apple Watch version has an advantage of being first out of the gate with a few of the most popular apps on the App Store. Do Note could be in the same boat, but with a focus on Evernote functionality right now - which has its own dictation-inspired note app launching for the Watch - it's yet to be seen if IFTTT's Do Note app will be as functional as Do Button on the Watch.

With the incoming update later today, all three IFTTT apps, including Do Camera, will be made available for iPad, as well. It will no doubt be interesting to see as time goes on the kinds of recipes users create, and IFTTT itself recommends, specifically due to the ease-of-use of the Apple Watch.

Locoboof
This is actually good to know. I'll use this for my nest thermostats and my garage door opener until they officially make one. Thank you!
Score: 1 Votes (Like | Disagree)
Read All Comments

Wednesday July 8, 2020 3:14 pm PDT by Juli Clover
Apple is working on Macs that use its custom Apple-designed Apple Silicon chips instead of Intel chips, but Apple has committed to continuing to support Thunderbolt, reports The Verge. In a statement, an Apple spokesperson said that Apple's upcoming machines will offer support for Intel's Thunderbolt USB-C standard. "Over a decade ago, Apple partnered with Intel to design and develop...
Read Full Article • 211 comments