A rare functional Apple-1 Personal Computer has popped up on eBay this week after its owner decided to downsize his Apple collection. The Apple-1 computer, called the Copson Apple-1 by its current owner, is one of less than 50 known machines in existence. Apple-1 computers are popular with collectors as they were the first computers produced by Apple and were sold by Steve Jobs out of his parents' garage in 1976.

Originally retailing for $666.66, the Apple-1 in the auction was purchased by Joey Copson and held in the same family for more than 36 years. Bob Luther, who was writing a book on a separate Apple-1 computer, came across the Copson Apple-1 during his research and purchased it from Copson's family. 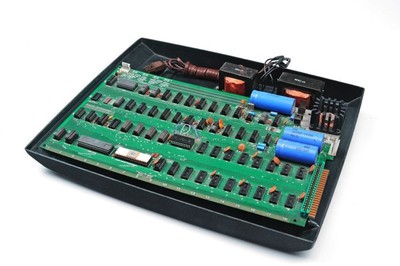 According to the auction, the Apple-1 was recently serviced and turned on by computer historian Corey Cohen, and it includes an Apple-1 Cassette board accessory. It comes with a date-stamped keyboard and a clam shell case supplied by the original owner. The Copson Apple-1 was originally placed up for auction in 2012 in a non-working condition where it didn't meet the minimum bid, but was later refurbished and repaired.

"The Copson board is an 8 out of 10..." and, "Late in 2014, I was asked to bring the Copson Apple-1 setup back to working state. In the process of my evaluation, the Copson Apple-1 board was chemically stabilized and cleaned. I took extreme care to keep all the discrete components on the board original by performing some minor repairs instead of replacing components unnecessarily, maintaining its originality. The Copson Apple-1 has no cuts, repairs or modifications to the PCB board.

The Copson Apple-1 is unique due to the futuristic custom plastic case that Joe Copson placed it in. The case appears oddly similar in design to what would be used later by the early Apple II. The distinctive jumper wiring also performed by Joe Copson when he later purchased the Apple Cassette Interface, can also be used to uniquely identify and confirm this is the Copson Apple-1 board from other early Byte Shop Apple-1s that also predate the Apple Cassette Interface's availability."

The Copson Apple-1 is labeled as 01-0022, suggesting that it's potentially an earlier build than other Apple-1 machines that have sold for more money, including a working Apple-1 that sold for $905,000 to the Henry Ford Museum back in October. That machine was numbered "01-0070."

There's no reserve price on the Apple-1 auction, but bidders must be pre-approved. The current bid is at $20,600 and the auction ends in eight days.

Luther is also auctioning off a few other rare Apple items, including an early production Apple II computer. 10 percent of the proceeds from the auctions will go to the ALS Association.

ttss6
It's interesting how no one at Apple at the time didn't appear to have a problem with selling something for $666. That combined with the Apple logo with a bite taken out of it would freak some people out...
Score: 2 Votes (Like | Disagree)

How many of these are there even left?

I heard Steve Wozniak priced it $666.666 because he liked repeating numbers..

I forget which book it was where it said Jobs had no idea of the meaning of 666. But I don't recall who actually came up with the price. I remember thinking, who doesn't know 666?

It could have been iWoz I heard Jobs didn't know what 666 meant, or maybe both of them didn't know?... Woz takes credit for inventing everything from sliced bread to the first PC in iWoz, so he probably said he chose the price based on something. Listening to iWoz was so painful. I like when other people say how genius someone else is, but when someone is telling you how genius they are, it gets old quick. I couldn't even finish the book. I also didn't like how he used the "i" in his name when he had no association with iDevice, and going back farther, had nothing to do with the Macintosh either, preferring to keep working on the Apple II. So although the guy was key pre-1980, not much since. I really think he could have created some really great things, but for some reason, he just lost his passion to create great things. Steve J. never lost that passion and that's why Apple is where it is today. Thanks Woz, Jan. 1, 1980.
Score: 1 Votes (Like | Disagree)


It's also a sign of Jobs' and Wozniak's sense of humor. Jobs priced it that way specifically because it was taboo.
Score: 1 Votes (Like | Disagree)

It's interesting how no one at Apple at the time didn't appear to have a problem with selling something for $666. That combined with the Apple logo with a bite taken out of it would freak some people out...


christian fundamentalists maybe  a lot of them live in the U.S. nowadays.
Score: 1 Votes (Like | Disagree)
Read All Comments

Friday April 9, 2021 12:21 pm PDT by Juli Clover
Epic Games and Apple are involved in a highly public lawsuit in the United States, but Epic has also sued Apple in other countries, including Australia, in an attempt to boost its chances of getting a favorable ruling. Things aren't quite going Epic's way, however, as the justice overseeing the case today decided that he's going to let the two companies battle it out in the United States. ...
Read Full Article • 124 comments