Apple CEO Tim Cook visited the Palo Alto Apple Store in Palo Alto, California this morning as it opened its doors to let customers get their first look at the new Apple Watch. Cook was spotted chatting with potential customers and having a conversation with The Loop's Jim Dalrymple and iMore's Rene Ritchie. 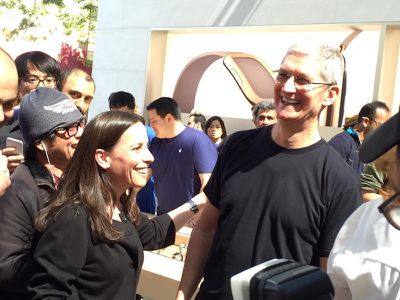 Image courtesy of CNET's Shara Tibken
Several members of the media were on hand at the Palo Alto Store opening, as it's one of the flagship Bay Area stores that often sees visits from Apple executives. Tim Cook spoke to CNBC, telling the news site that pre-orders for the Apple Watch have been "great."

It has been incredible. You know this morning, I got reports from all the way around the world, from Japan to Australia to China to Germany to France to the U.K. to Canada and now the U.S. It is extraordinary. Customers are giving us great feedback and orders are great as well.

Cook also commented on the Apple Watch that he's wearing himself, telling CNBC's Josh Lipton that he wears the stainless steel Apple Watch with the White fluoroelastomer band most of the time, as that's what he works out in. Cook also said that he has a few other bands on hand, because he likes to change them out on occasion. "I am wearing this one the most," he said. "So I would highly recommend it to all of the listeners."


The Apple Watch became available for pre-order at 12:01 a.m. Pacific Time earlier today, and initial pre-orders sold out very quickly. In less than an hour, shipping estimates for many Apple Watch models had slipped to 4 to 6 weeks or beyond, and within six hours, there were no longer any models available for an estimated delivery date of April 24 to May 8, the shipping estimate the earliest orderers received. Many customers who order today and beyond won't be able to obtain devices until May or June, and later in some cases.

As of today, Apple Stores around the world are allowing customers to try on the Apple Watch to get a feel for the device ahead of its official launch.

Steve showed up at stores wearing a tee shirt?


This is the first iphone launch.

mrgraff
Have I stepped into a parallel universe where the word "great" is a negative term?
Score: 26 Votes (Like | Disagree)

D28Z98
"Sales have been great! And our customers are going to love Apple Watch when they get to actually put the thing on their wrists in several, several - several months"...
Score: 25 Votes (Like | Disagree)

I would imagine that Apple sold that many within 2 minutes.

As with other product categories, Apple hasn't always been the first to get something to market. But, what they usually get out is better than what has been available previously.
Score: 23 Votes (Like | Disagree)

Was Steve ever this visible?


when he was healthy.
Score: 17 Votes (Like | Disagree)
Read All Comments