Apple's retail employees were today given newly redesigned shirts that will be worn during the Apple Watch launch, MacRumors has learned. The shirts are a dark shade of navy blue, much darker in color than the existing brighter blue shirts employees wear now. Employees have been given two T-shirts each and have been instructed to wear the shirts beginning on April 10. Apple also typically distributes polo shirts and T-shirts with longer sleeves, but employees have not yet received these.

The new shirts Apple employees are receiving for the Apple Watch mark the second wardrobe change that's been enacted this year. In January, Apple distributed redesigned T-shirts and polo shirts all in a dark shade of blue, with an Apple logo located at the top left of the shirt, over the heart. 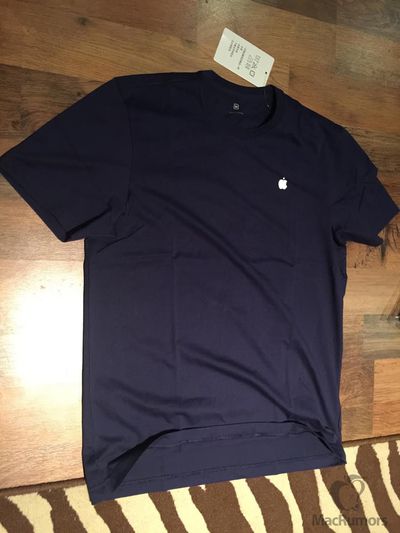 Apple's head of retail Angela Ahrendts was rumored to be behind the first style change, and she's likely handling the new look for employees during the Apple Watch as well, using her expertise as Burberry's former CEO to find a uniform look that's suitable for employees handling every day sales and those dedicated to serving high-end retail customers as Apple prepares to start selling its first luxury item, the gold Apple Watch Edition.

Along with new shirts, the launch of the Apple Watch has brought many changes for retail employees. Employees are undergoing rigorous training in order to get ready to sell the Apple Watch, which is being positioned as a fashion item. As we've learned from leaked training materials, employees are learning how to interact with customers in all new ways, evaluating customer style and preference to make product recommendations.

Training is still ongoing, and as of this week, employees have been learning what store-front displays will look like and they've begun to receive word on which stores will be carrying the gold Apple Watch Edition. It appears that only a limited number of flagship stores will have the higher-end device available for sale, and safes are being installed in some of these stores this week. In the United Kingdom, for example, only the Covent Garden and Regent Street Apple Stores are said to be selling the Apple Watch Edition, along with the dedicated shop in Selfridges department store in London.

The Apple Watch will go on sale online this Friday at 12:01 a.m. Pacific Time. It will be available in all first-wave launch countries simultaneously, including Australia, Canada, China, France, Germany, Hong Kong, Japan, the United Kingdom, and the United States.

tuslaw12
I can see the headlines later today "Samsung gives employees new shirts that are thinner, have an extra arm hole, and are slightly water resistant." I'm calling it now
Score: 22 Votes (Like | Disagree)

CoMoMacUser
That's all they'll be wearing? No pants?
Score: 14 Votes (Like | Disagree)

ttss6
I'm not sure about this. I like how they wear brighter colors so they are easier to see. This is helpful in the local Apple Store which is usually pretty crowded.
Score: 12 Votes (Like | Disagree)

Was expecting a collar :)

The ones that handle the appointments for the $10,000 models have the collared shirts :D

Make it yourself, or have someone else make one for you? I know plenty of people who can screenprint shirts, and I've done iron-ons before (but going the iron-on route sucks. Just find someone with a screenprinter and ask them to do it for you.) Or there's probably no shortage of online services that can do this for you for a small fee.


Thank you all powerful and mighty Google Ads.
Score: 8 Votes (Like | Disagree)
Read All Comments