Called the Regera, which translates to "to reign" in Swedish, the car can go from 0 to 250 miles per hour within 20 seconds, and it tops out at a speed of 255 miles per hour. It's equipped with a 5.0-litre twin-turbo V8 engine along with three electric motors. One motor replaces the standard transmission with the Koenigsegg Direct Drive system, and there's a motor dedicated to each rear wheel. 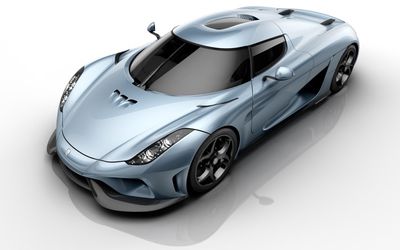 Inside, the Regera is equipped with an infotainment system that includes a 9-inch infrared zForce Neonode touchscreen, which is said to offer superior touch performance and multi-touch gestures. The infotainment system is compatible with Apple's CarPlay, letting Regera buyers connect their iPhones to their cars to access all of CarPlay's features.

The Koenigsegg Regera is priced at $1,890,000, and only 80 of the cars will be produced. The version being shown off at the Geneva Motor Show is the first in the series, and is said to be 95 percent complete.

A long list of automobile manufacturers have signed up to partner with Apple and introduce CarPlay in upcoming vehicles, but thus far, Ferrari is the only brand that has produced a car that's available with CarPlay -- the $300,000 Ferrari FF. Audi, Volkswagen, and Hyundai have all promised that CarPlay-compatible cars will be available in 2015, and there are a number of aftermarket CarPlay solutions from Alpine and Pioneer that are currently available for purchase.

cheesyappleuser
I'm pretty sure CarPlay is going to be a major selling point here.
Score: 49 Votes (Like | Disagree)

reedmo
Time to call the Top Gear guys! The UK guys, not US.
Score: 37 Votes (Like | Disagree)

TXCherokee
This or the Apple Watch....

I'm pretty sure CarPlay is going to be a major selling point here.

My first thought. CarPlay? I'm sold. I was looking elsewhere but CarPlay convinced me. Time to sell the minivan and get this Koenigsegg.
Score: 18 Votes (Like | Disagree)

Called the Regera, which translates to "to reign" in Swedish, the car can go from 0 to 250 miles per hour within 20 seconds, and it tops out at a speed of 255 miles per hour.

has only increased the safe feeling I get while driving.
Score: 17 Votes (Like | Disagree)
Read All Comments

Wednesday January 26, 2022 8:56 am PST by Joe Rossignol
Benchmark results have started to surface for MSI's new GE76 Raider, one of the first laptops to be powered by Intel's new 12th-generation Core i9 processor. Intel previously said that its new high-end Core i9 processor is faster than Apple's M1 Max chip in the 16-inch MacBook Pro and, as noted by Macworld, early Geekbench 5 results do appear to confirm this claim, but there are several...
Read Full Article • 243 comments