On the heels of an earnings call that saw Apple announcing record earnings, rival phone maker Samsung today announced its own results for the October to December period, reporting a 27 percent quarterly decline in earnings.

Samsung saw net profit of 5.3 trillion won ($4.9 billion), compared to 7.3 trillion won last year, marking its first annual earnings decline in three years and its fifth consecutive quarter of decline. Apple, meanwhile, announced record earnings of $18 billion, largely due to the success of the iPhone 6 and iPhone 6 Plus. 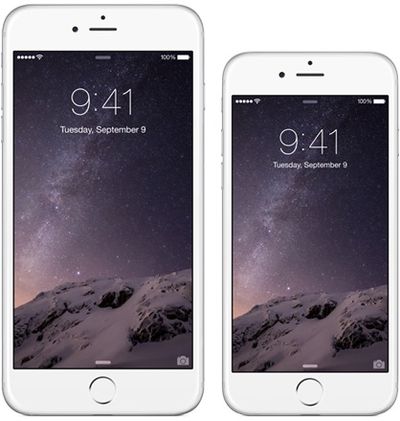 Overall, Samsung's 2014 profit was at 25 trillion won, down from 36.8 trillion won in 2013. Samsung did not announce mobile sales numbers, but Apple sold a record 74.5 million iPhones during the quarter.

Market research has suggested that Apple's share of the smartphone market in Asia rose dramatically after the launch of the 4.7-inch iPhone 6 and the 5.5-inch iPhone 6 Plus. According to a recent report, Apple gained significant share in Japan, China, and South Korea, countries where Samsung has previously dominated due to demand for big screen smartphones.

While Samsung's mobile sales were down 64 percent year over year, its semiconductor division earned 2.7 trillion won due to high demand for the chips that it sells to companies like Apple, boosting earnings from the previous quarter and helping it meet guidance and beat analyst estimates.

Chip maker Qualcomm also reported its own earnings today [PDF], and noted the loss of a major customer thought to be Samsung. Samsung's Galaxy S6 is unlikely to feature the Snapdragon 810 processor due to issues with overheating, and the South Korean company may opt to use its own chips instead.

Samsung expects continued growth in its mobile division in 2015 in emerging markets, and it also plans to introduce "new materials, innovative design, and differentiated features" in its devices to drive sales.

some1uDNTknow
Sounds like the Next Big Thing is not working out too well.
Score: 64 Votes (Like | Disagree)

nfl46
Am I the only one that noticed Samsung really hasn't come out with any new commercials attacking Apple since the iPhone 6/6Plus has come out? I think the popularity of those devices took Samsung by surprised. Now, they are looking stupid because Apple is getting the last laugh. That's why it's not good to try to bully people, because in the end, you look like an ass!
Score: 44 Votes (Like | Disagree)

Before people go off on one, please remember the actual results of shipped phones worldwide by Samsung is much higher than Apple:

In fact Apple has remained stagnant, Samsung has dropped, and all the other manufacturers have increased their numbers... Apple has a very long way to go to be worldwide number one.


No one said they have to be number 1. But everyone that owns an iPhone knows this to be a fact.
Score: 38 Votes (Like | Disagree)

Before people go off on one, please remember the actual results of shipped phones worldwide by Samsung is much higher than Apple:

In fact Apple has remained stagnant, Samsung has dropped, and all the other manufacturers have increased their numbers... Apple has a very long way to go to be worldwide number one.


Samsung can sell all the phones they want. They still need to make money. And there, my friend, Apple is number one, two, and three.

If Samsung sold their copycat phones for $5 I'll bet they could crow about unit sales numbers all the way to bankruptcy court. After which they wouldn't be making any.
Score: 21 Votes (Like | Disagree)
Read All Comments