Apple's iPhone 6 continues to outsell the iPhone 6 Plus around the world, but the larger-sized phone is proving to be a significant hit in some markets, reports AppLovin in its latest November 2014 report.

According to AppLovin's analytics data, the iPhone 6 outsold the 6 Plus in an 80/20 ratio overall in the first 45 days of availability. While Europe, North America and Australia roughly follow this global sales distribution or lean slightly more heavily toward the iPhone 6, the trend changes in Asia, where the iPhone 6 Plus typically accounts for 35 percent or more of iPhone sales. 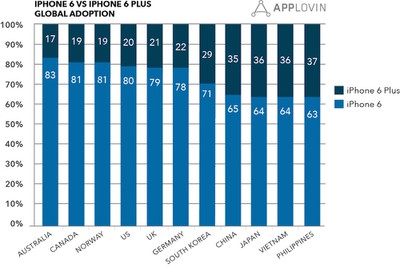 South Korea, home to rivals Samsung and LG, is the only Asian country studied with an iPhone 6 Plus adoption rate below 35 percent. The country has a lower 71/29 split, perhaps related to competition from Samsung's Galaxy Series and LG's G3 phone in the large-screen market or simply due to customer preference for other reasons.

The split between iPhone 6 and 6 Plus may still be artificially constrained due to continuing shortages of the larger iPhone 6 Plus, but AppLovin's data offers an interesting glimpse of screen size preferences around the world. The ratio also varies significantly by data source, with a recent survey putting the U.S. ratio at 3:1 in favor of the iPhone 6 over the first four weeks of availability while AppLovin's data points to a 4:1 split.

As discussed by Apple's iPhone marketing chief Greg Joswiak at the Code Conference last month, the true ratio of demand won't be known until supply shortages are alleviated, but he did acknowledge that the ratio varies from country to country with Asian customers typically proving more likely to prefer larger screens, an observation supported by AppLovin's data.

AdonisSMU
Some people accepted a 6 because the 6+ wasn't available. I want to see what the numbers are in Jan-Mar quarter.
Score: 19 Votes (Like | Disagree)

Any sociologists out there who want to explain why the Asian demographic prefers the larger device?


Not a sociologist by any means, but things I've heard that resonate:

 Less PC use at home/only device

If you couple these things together, if you're doing 100% of your browsing/email/internet/gaming on a mobile device, wouldn't you want a larger device?
Score: 14 Votes (Like | Disagree)

Bobby Corwen
Lol Australians and Canadians think everything is BS and were the least likely to fall for the hype of the 6 Plus.
Score: 11 Votes (Like | Disagree)

Some people accepted a 6 because the 6+ wasn't available. I want to see what the numbers are in Jan-Mar quarter.


Most reasonable people who aren't obsessed with technology (95%+ of the population) aren't going to buy the iPhone 6 just because the Plus wasn't available. They're going to buy the device that they want and wait for it. Most people aren't that impatient when it comes to technology. Heck, I'm pretty obsessed with technology and even I waited until my local store had the iPad Air 2 128GB in Space Gray. On retail launch day they only had silver and gold, so I just waited, even though it was just about a bezel color. I bet the difference in the next quarter will be within a few percent.
Score: 9 Votes (Like | Disagree)

Any sociologists out there who want to explain why the Asian demographic prefers the larger device?

I'm no sociologist, but I know that in Japan at least a large portion of the population commutes long distances through public transportation. Larger devices would certainly be helpful for passing the time in this situation.
Score: 8 Votes (Like | Disagree)

or simply due to customer preference for other reasons.


Some quality market analysis right there.
Score: 6 Votes (Like | Disagree)
Read All Comments

Monday June 21, 2021 7:07 am PDT by Joe Rossignol
Following widespread reports that the iPhone 12 mini has experienced poor sales performance, at least relative to other iPhone 12 models, Taiwanese research firm TrendForce today claimed that production of the device has already ended. According to TrendForce, the iPhone 12 mini "reached End-of-Life ahead of time" during the second quarter of 2021, suggesting that Apple will focus on selling ...
Read Full Article • 179 comments

Monday June 21, 2021 7:17 am PDT by Hartley Charlton
Users appear to be underwhelmed by Apple's upcoming iOS 15 and iPadOS 15 updates, according to the findings of a new survey by SellCell. The survey asked 3,000 iPhone and iPad users, evenly split between men and women, aged 18 or over in the United States, what they thought of iOS 15, iPadOS 15, and the naming of the upcoming iPhone 13 lineup. Over 50 percent of all of the survey's...
Read Full Article • 384 comments