Apple's spaceship-shaped campus under construction in Cupertino will include a spot for a historic barn, reports the San Jose Mercury News. First constructed in 1916, the Glendenning Barn is a historic Cupertino site left from a time when the city was still a sprawling orchard.

During the teardown of the existing HP campus, Apple dismantled the redwood barn plank by plank and made careful notes on its construction because the company pledged to relocate the building to another site.

It was initially unclear whether the barn would remain on the campus, but it appears it will indeed stay on Apple's property, nestled among the many fruit trees the company plans to build around its spaceship-shaped building. The barn, according to the Mercury News, will be used as an equipment storage facility by Apple and will be located directly adjacent to the employee fitness center. 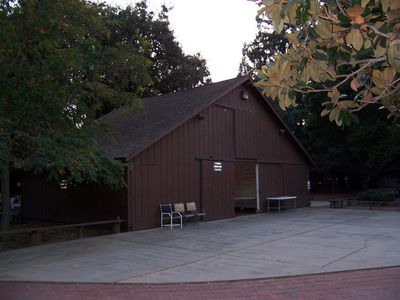 To protect the structure during construction, Apple carefully dismembered the barn, numbering it piece by piece -- every plank, nail and crossbeam -- so it can be rebuilt just as it was, says Donna Austin, president of the Cupertino Historical Society. The company has even stockpiled redwood salvaged from an old grove in case any damaged planks need to be replaced.

Under Apple's care, it will be a working barn for the first time in decades, storing sports equipment and the landscaping supplies the company will need for the thousands of trees that will shade the campus.

Apple's second campus was designed in part by former CEO Steve Jobs, and one of his main goals was to give the site a more natural look and feel, returning many of the native plants and trees that grew in the area before it was turned into an office site by former owner Hewlett-Packard.

Apple's growing focus on the environment is fully evidenced in the new campus design, which includes 80 percent green space, a central garden with outdoor dining areas, and more than 300 different species of trees. The campus was also built to use efficient water and landscaping and it will get 70 percent of its energy from solar and fuel cells.

Construction on Apple's second campus is well underway, with the foundation complete and walls beginning to take shape. Apple plans to finish the campus by the end of 2016, and construction crews work at the site almost around the clock to keep the building plans on schedule.

macduke
Never thought I'd be reading news about barns on MacRumors. They should put Jony's new laboratory in there just to drive him crazy with the real-life skeuomorphism of wood.
Score: 24 Votes (Like | Disagree)

But ultimately, it won't be the same barn....

That's an interesting existential question. If we clone someone, is it the same person? And since many of the materials that make up your own body are constantly being replenished, are you the same person you used to be?

But ultimately, it won't be the same barn....


it'll be the same barn, just not in it's original envirinment.


well technically even your comment is historic since it was posted earlier today. :D
Score: 7 Votes (Like | Disagree)

Friday August 12, 2022 2:34 pm PDT by Juli Clover
There's just about a month to go until Apple holds its annual September event focusing on new iPhone and Apple Watch models. We thought we'd take a quick look at everything that's rumored for Apple's September event to give MacRumors readers a rundown on what to expect when the first fall event rolls around. iPhone 14 The iPhone 14 can probably be described more as an "iPhone 13S" because...
Read Full Article • 150 comments

Friday August 12, 2022 12:46 pm PDT by Juli Clover
Samsung this week launched its fourth-generation foldable devices, the $1,000 Galaxy Z Flip and the $1,800 Galaxy Z Fold. Though there's no sign of a comparable Apple foldable device on the horizon, rumors suggest prototypes are in the works, so we thought we'd take a look at Samsung's newest smartphones to see what Apple needs to measure up to when a foldable iPhone does come out. Subscribe ...
Read Full Article • 306 comments