As work on Apple's Campus 2 in Cupertino has continued throughout the fall, the spaceship-shaped structure has rapidly grown from basic foundations to the beginnings of an actual structure. Now, thanks some aerial shots recently taken by AppleInsider's DJI Phantom 2 Vision Plus drone, the construction site appears to be moving along rapidly with concrete slab poured around the ring of the structure and a few dozen cranes working across the site. 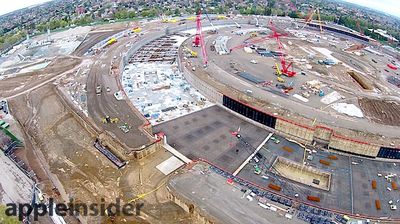 As noted by AppleInsider, the earth-built ramps previously used to gain access to the site are now gone following the installation of the concrete floor. Instead, work on an underground channel access has begun, with plans to connect the main employee entrance off of Wolfe Road to the garage underneath the main structure and the two above-ground parking garages.


One of the biggest advancements to the campus worth noting is the separate 120,000 square foot "event center" that is costing the company around $161 million and will house an auditorium and product demo space for the company's media events. The outline of the primarily underground structure has received more definition alongside a surrounding bank that will eventually be tree-lined.

The parking facility, which includes an underground segment, is also rising rapidly, and is currently built up to the third level. It's the first of two similar structures being built that will together provide parking spaces for over 5,000 cars visiting the campus.

Though construction has continued steadily throughout the last half of 2014, the Apple's Campus 2 obviously still has a long way to go until completion. Besides the main "spaceship" structure, event theater, fitness center, and parking garages, Apple also submitted revised plans in October adding a few offices, testing facilities, and additional parking garages onto the second phase of construction. The complete campus is expected to be finished by the end of 2016.

BornAgainMac
Where is the exhaust port? It should be only 2 meters wide.
Score: 14 Votes (Like | Disagree)

What a waste. Superfluous spending with no benefit to the customer or stockholder.

No, but the staff benefit. And if they're happier, the products will improve and the customers will be happy.

I'm fed up hearing about stockholders.

The company is making enough money to run and pay it's staff, run operations and make a nice profit, too. The customers are happy with the products. Yet the company can be seen to be "failing" because it's share price is low? It's madness.
Score: 10 Votes (Like | Disagree)

Oh, the timing.
With soldered RAM, really nice Android smartphones out there, and an exhausted bag of tricks (left overs from Steve Jobs), Apple will have the nicest executive office rental to pay the bills.


The troll is strong in this one.

Does anyone see this and wonder what will happen when the start downsizing?


They have enough cash that even if the business falters they won't go out if business for decades.
Score: 7 Votes (Like | Disagree)

I would have thought that there would be a bus stop and a bunch of bike racks, given Apple's commitment to the environment. :p
Score: 5 Votes (Like | Disagree)

RickInHouston
Does anyone see this and wonder what will happen when the start downsizing?
Score: 4 Votes (Like | Disagree)

What a waste. Superfluous spending with no benefit to the customer or stockholder.
:apple:


You could not be any more wrong.

In the original application, Apple noted that they currently occupy buildings across several different sites. Moving the majority of people into a central location cuts costs.

Also, as others have already said. The new campus will provide considerably better working environment, with it no doubt larger and even better equipped R&D facilities. Providing long term support to product development, therefore customer impacting and beneficial to shareholders.

On a more positive note, these videos really put into perspective how huge this building is going to be! The renderings were impressive but it's only when you see cranes and trucks on site you start to visualise it's true size!
Score: 3 Votes (Like | Disagree)
Read All Comments