Apple today received final approval for its Apple Campus 2 project from the Cupertino City Council after gaining a unanimous initial approval back in October. "Go for it," said Cupertino Mayor Orrin Mahoney, following tonight's unanimous vote in favor of the project. "We're eager to see it happen. Go for it."

With the vote, the Cupertino City Council approved the necessary ordinances to allow Apple to enter into an official Development Agreement with the City of Cupertino, which will see the company receiving its full set of building permits on November 20. Apple has already received ancillary permits allowing it to begin demolition of the former HP campus that is already on the site. 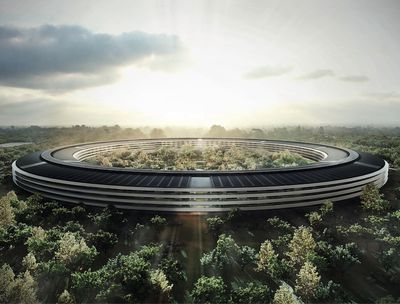 As part of the final agreement, Apple has agreed to increase the amount of taxes that it pays to the City of Cupertino, in the form of a reduction of the sales tax rebate that the company receives each year from the city (via The Los Angeles Times). Last year, Cupertino refunded 50 percent of the sales taxes it received from Apple-related purchases, but in the future, it will only refund 35 percent of sales taxes.

Phase 1 of the Campus 2 construction will include a 2.8 million square foot ring-shaped main building with an underground parking facility capable of accommodating approximately 2,400 vehicles. A 100,000 square foot fitness center and a 120,000 square foot auditorium will also be built. During a second phase of construction, Apple will build 600,000 square feet worth of office, research, and development buildings, along with additional parking and energy generation facilities.

Apple's Campus 2 is designed to be environmentally friendly, incorporating 80 percent green space with 300 different species of trees, orchards, and a central garden with outdoor dining areas. The facility will also use efficient water and landscaping in addition to garnering 70 percent of its energy from solar and fuel cells.

Apple plans to finish the first phase of the Apple Campus 2 construction by 2016.

lolkthxbai
Steve Jobs has to approve it now.
Score: 13 Votes (Like | Disagree)

But wait! The pope has to approve it next.
Score: 11 Votes (Like | Disagree)

I can't wait for more articles about the demolition of the old buildings... and the groundbreaking... and the delivery of the building materials... and the planting of the trees... and...

It's gonna be a long couple of years...

Alphabetize
I feel like they've been approved about three or four times now :rolleyes:
Score: 6 Votes (Like | Disagree)

Let me get this straight:

So Apple wants to build one of the nicest, environmentally-integrative, energy-efficient, modernly-designed, attractive offices in the country, will provide thousands of construction jobs during the years it builds it, has assured tens of thousands of permanent jobs in the area following completion, is going to do additional work to make the surrounding city area nicer and more accommodating, already has overwhelming public approval to do this, and they are willing to do it in one of the most business-unfriendly states, in an already way-overpriced area to live (the bay area), just because they want to stay local, and the city of Cupertino is like,

"Yeah, we'll only approve it if you agree to pay us more."

Apple should have told these greedy government money-flushers to piss off, that the primary reason they have any interest in Cupertino was because Jobs couldn't see past his doorstep but that they see things more practically, and that any other city would be thrilled to accept their plan for a class-of-its-own office with city improvements and a boost to both temporary and long-term employment without a tax hit.

This confirms one thing: Tim Cook sucks at negotiating.

You're calling the government greedy money-flushers, while Apple are the ones getting half of the sales tax for purchases of Apple products? Apple shouldn't be getting ANY of the proceeds of sales tax!

From the linked article:

According to an economic development report released this summer by Apple, sales by the company generated $12.7 million in sales tax for Cupertino in 2012. Under the terms of old rebate agreement, Cupertino gave $6.2 million of that back to Apple.

Had the lower rate been in effect in 2012, Cupertino would have kept an extra $1.8 million. For a city with projected general fund revenues of $51.4 million for the current fiscal year, that extra money will be a nice bonus.

Cupertino had originally agreed to a tax rebate for Apple back in 1997, when the company was teetering on the brink of bankruptcy. In exchange for the rebate, Apple agreed to assign more of its sales to Cupertino.

The city renewed the deal twice since then. The latest deal was set to expire in 2014, but Apple had made it clear that it wanted to renew the agreement as part of a deal for the new campus.

So actually, the whole fact this deal still exists (even at its lower rate) is a negotiating win for Tim Cook, taking money from the City of Cupertino in the first place. It originally existed to help Apple try and survive (how nice of the city to do that for them), and it's totally absurd that they still get it. They definitely don't need it - that $6M income is meaningless for Apple whereas it would represent a 12% increase in revenue for the City (they could give all municipal workers a 15% raise and still have change with that).

Also, you've totally neglected all of the benefits to Apple by being in the Bay Area. Sure, they could relocate to Reno or Albuquerque or wherever, but good luck attracting top-class talent. You're also forgetting the fact that this was part of a life-raft thrown to Apple by the City when they were facing bankruptcy.

Corporations cannot just take, take, take from governments under the threat of otherwise not providing jobs. The City gave Apple a hand when it was in a dire situation, but it seems Apple is not willing to reciprocate.
Score: 5 Votes (Like | Disagree)
Read All Comments