Apple has submitted Apple Campus Phase 2 architectural and site refinement plans to the City of Cupertino, signaling its readiness to begin the second phase of construction on its spaceship campus as soon as first phase construction has been completed.

In a massive 72 page PDF, Apple outlines revised plans for a set of research and development buildings located to the east and west of North Tantau Avenue, adjacent to the main circular campus building. While Apple has already received approval for the second phase of construction, the updated documents address specific changes the company is hoping to make to the area.

Constructed in a 600,000 square foot space, the Tantau Development will house 2,200 employees and will include parking facilities with 1,740 parking spots. The main Tantau building will include four stories of office space for employees along with a built-in cafeteria. Two other buildings will house two-story testing facilities. 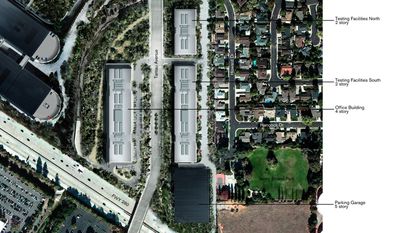 According to the revised documents, Apple's original plans for the area are largely intact, but some minor refinements have been made to address building size/height and the location of the parking facilities. The company originally planned for a parking basement, but has now shifted its plans to include both a smaller basement and a larger above ground parking structure, along with an underground server room. Apple also changed the size of the prospective cafeteria somewhat in order to accommodate more office space, and shifted the sizes of some of its planned research facilities.

It is unclear when construction on the Tantau buildings might begin, but Apple is scheduled to complete its main campus building in 2016. A city hearing to consider the updated plans will take place on November 15, 2014.

TWSS37
But how much RAM does it have
Score: 15 Votes (Like | Disagree)


they are still redesigning the shuttles

malcolmffc
It amazes me that the U.S. continues to build these massive developments without a thought for public transport.
Score: 5 Votes (Like | Disagree)

But how much RAM does it have


I don't know, but I heard everything is going to be soldered down.
Score: 3 Votes (Like | Disagree)

I don't see the guard towers and machine gun posts on that photo.

The best security is the type you never see 'til it is needed. Apple has this handled quite with plenty of low profile concealed carry security guards all over the place. If something goes down, it's nullified very quick.

It amazes me that the U.S. continues to build these massive developments without a thought for public transport.

Moving mass transit beyond bus lines into Cupertino has been a long political battle with Apple in favor of it but the NIMBY residents keeping it out.

With the wealth that Apple created along with other technology businesses, Cupertino has become an affluent community with million dollar, quarter acre residential lots. To many in Cupertino, the introduction of a rail service is a threat to the exclusiveness and thus property values. Yes, you can argue against that but that is their mindset.

There have been plans for a "third leg" of the VTA light rail going from the Lockheed station down Sunnyvale-Saratoga Avenue with a stops in Sunnyvale, Cupertino and Saratoga. So far, only Sunnyvale is for it.

Apple could build their own train system


I get this vision of the Apple campus going the way that Disney originally envisioned EPCOT. That is a community with residents, industrial parks and lots of different mass transit forms.

The monorails in the Disney theme parks were originally a prototype mass transit system for cities to consider. That never happened and it just became a novelty.
Score: 3 Votes (Like | Disagree)
Read All Comments