Twitter for Mac received its last major update in December 2013 in the form of a revamped look with some new features, and the app has finally received another update bringing support for several additional photo features. Among them is the ability to post and view up to four photos in a single Tweet, a feature rolled out for the service in general some six months ago.

This update brings new photo features to Twitter for Mac.
- View and post Tweets with as many as four photos (click each image preview to view the full photo)
- Share photos privately in Messages
- More performance improvements and bug fixes 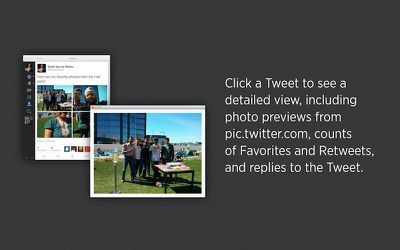 LazarusX
Oh my god even Twitter for Mac got updated, so how about AppShopper Social for iOS (last updated Aug 09 '13)
Score: 4 Votes (Like | Disagree)

scaredpoet
About time! The Mac app has pretty much been Twitter's bastard stepchild.
Score: 2 Votes (Like | Disagree)

afro-ninja
You should all try Tweetdeck. By Twitter, and VASTLY better than the normal app.
Score: 1 Votes (Like | Disagree)

jonnysods
I thought they ditched this app?
Score: 1 Votes (Like | Disagree)

Whatever happened to the MacRumors app? It seems like its been mentioned a few times, and often it's included in pictures of mockups of iOS devices commissioned by MacRumors, but it still isn't available on the App Store yet.


That's just an icon. We've discussed ideas for an app, but to be honest we're hesitant to invest money, time, and effort into one after all of the problems with the AppShopper and TouchArcade apps.

Use this daily, split the 27" iMac screen with this by the side.
Glad to have it updated. Wish it would auto update, instead of me having to scroll up though. My feed isn't that full.


There's an option to "scroll to top"
Score: 1 Votes (Like | Disagree)
Read All Comments

Sunday January 16, 2022 8:56 am PST by Sami Fathi
Continuing the tradition set with the iPhone 13 Pro, only the highest-end iPhone 14 models will feature Apple's ProMotion display technology, according to a respected display analyst. Ross Young, who on multiple occasions has detailed accurate information about Apple's future products, said in a tweet that ProMotion will not be expanded to the entire iPhone 14 lineup and will remain...
Read Full Article • 89 comments