Twitter for Mac was today updated to version 3.0, adding several new features plus a revamped look and feel to bring it more in line with the Twitter for iOS app.

The app has gained display previews for Twitter photos, along with a detailed view for Tweets that offers photos, other Tweets in the conversation, and favorite and retweet counts. Profiles have also gained a new look, with a profile banner header that includes more detailed information on each user. 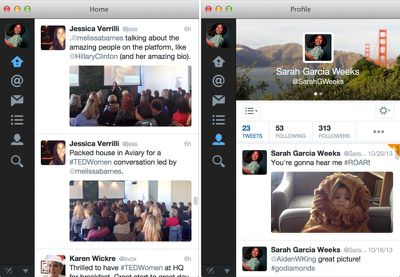 This release comes with a number of enhancements and changes.

More visual and engaging timelines
- Previews of Twitter photos will be front and center in Tweets. To see more of the photo, just click. If you want to disable previews, just go to preferences and uncheck "image previews."

Get more from Tweets
- Check out the tweet detail pane to see the conversation around a tweet as well as favorite and retweet counts.

Beautiful profiles
- Profiles now show header photos to display the unique personality of every user. Learn more about them by seeing who they follow and are followed by, their lists, and their custom timelines.

Updated design
- We’ve refreshed the overall look and feel of the app.

Prior to today's update, Twitter for Mac's last major update was in April of 2013 to add Retina support and improvements to photo sharing. Before that, the app went without an update for nearly two years.

Twitter for Mac can be downloaded from the Mac App Store. [Direct Link]

Mwongozi
You'll have to pry TweetBot out of my cold dead hands.
Score: 4 Votes (Like | Disagree)

musika
I was just wondering when they were gonna update the Mac app. Sweet!

My Name is URL
Long overdue update for the Mac.
Score: 2 Votes (Like | Disagree)

mklaman
i remember when twitter bought tweetie from atebits and said they would cease updates.

i have been using it since before those days and always loved it for how simple and clean it is - perfect for personal use.

i am thankful twitter has decided that it was important to continue to update the app.
Score: 1 Votes (Like | Disagree)

Icaras
So far so good. Liking the new update and redesign. Now it's more on par with it's iPhone counterpart.

Now how about finish up the work and give the iPad version the same treatment?
Score: 1 Votes (Like | Disagree)
Read All Comments

Friday August 12, 2022 2:34 pm PDT by Juli Clover
There's just about a month to go until Apple holds its annual September event focusing on new iPhone and Apple Watch models. We thought we'd take a quick look at everything that's rumored for Apple's September event to give MacRumors readers a rundown on what to expect when the first fall event rolls around. iPhone 14 The iPhone 14 can probably be described more as an "iPhone 13S" because...
Read Full Article • 149 comments

Friday August 12, 2022 12:46 pm PDT by Juli Clover
Samsung this week launched its fourth-generation foldable devices, the $1,000 Galaxy Z Flip and the $1,800 Galaxy Z Fold. Though there's no sign of a comparable Apple foldable device on the horizon, rumors suggest prototypes are in the works, so we thought we'd take a look at Samsung's newest smartphones to see what Apple needs to measure up to when a foldable iPhone does come out. Subscribe ...
Read Full Article • 305 comments