Smartphone sales data from Kantar Worldpanel ComTech (via Business Insider) indicates consumer interest in the iPhone 5c remained strong in the UK ahead of the iPhone 6 announcement, with the lower-cost phone actually becoming the top-selling smartphone in the country for the month of August. 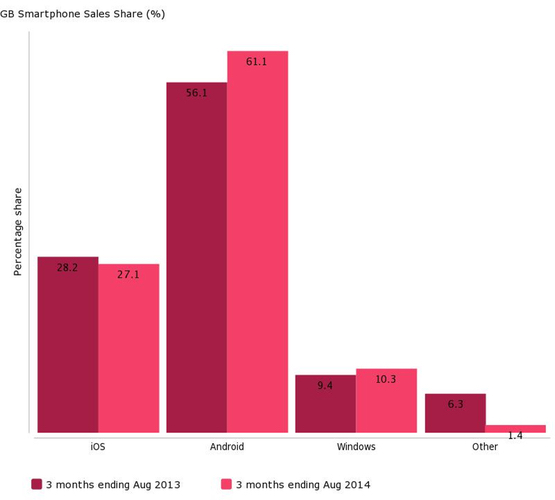 According to Kantar Worldpanel ComTech, Apple's share of smartphone sales in the UK fell just 1.6 percentage points between July and August, with strong sales of the iPhone 5c helping to prop up overall sales just ahead of the iPhone 6 launch.

Apple has managed to limit the drop this year with its share of sales dipping just 1.6 percentage points versus July this year - almost half the equivalent drop seen in 2013 ahead of the iPhone 5 launch. This has in part been achieved through focusing on the iPhone 5c which tends to attract a slightly less tech savvy buyer who will be less likely to be holding off for the iPhone 6. The iPhone 5c was the best selling phone in Britain in August with 8.9% share, outselling the flagship iPhone 5s with 7.6% and the Samsung Galaxy S5 with 6.0%.

This sales momentum for the iPhone 5c is not expected to impact future iPhone 6 and 6 Plus sales, however, as an estimated four million iPhone owners -- one-third of all iPhone owners in the UK -- are eligible for upgrade this year.

Apple released the iPhone 6 and 6 Plus last month, with strong consumer interest generating record-breaking pre-order and first weekend sales. Apple has struggled to supply enough handsets to meet consumer demand with shipping times slipping to seven to ten days for the iPhone 6 and three to four weeks for the 6 Plus.

Otelm
Maybe Im the only person in the universe who thinks so, but I really like my 5c. Fell on the floor countless times, once in water, but still works perfectly and hardly displays any scratch or dent.
Rating: 10 Votes

sockatume
Context: the 5C was really, really cheap here starting from about March this year. Many networks had "32GB for the price of 16GB" deals on, often for £30 a month. (At that price, the handset works out at something like £480, considerably cheaper than even the 16GB 5S at the time.)

And then in the period covered by this article, it got far cheaper again. For the last month could easily get contracts that effectively priced the 16GB 5C at £350, and the 32GB 5C at £400. (And probably even better offers if you dug around.) For reference, the Nexus 5 is £300 or £340 in those sizes. I think that's the reason for your sales surge: it was really stupidly good value for money.

Don't expect to see that continue on the 8GB model.

(My personal hypothesis for the price drops: Apple started offering really low wholesale prices in order to empty the supply chain of 16GB and 32GB models in preparation for discontinuing them.)
Rating: 5 Votes

cycledance
the white iphone 5c is the best iphone apple has ever made.
Rating: 4 Votes

allistera
But I thought the iPhone 5c was a flop?

Mtmspa
Every one I know with the 5C loves the phone. They just use a few apps and want something that just works.
Rating: 3 Votes

acearchie
A few of my friends fall into the non-tech savvy iPhone 5c demographic and they love it.

Have to say that I quickly borrowed my friends and there is a noticeable difference between that and my 6, I suppose that's what you get for 2 year old tech.

Fortunately the users aren't fussed about some of the features that I am. Just goes to show that the target readers of Macrumors who initially pooh-poohed the 5c launch are just a small drop in the ocean compared to the larger market.

The 2 year old tech doesn't put me off but to release a model with only 8GB (same for the 4S re-release as well) is a bit shocking.

I had a friend ask me to help them update to iOS 8 and I couldn't understand how he only had 300MB left when there was nothing on the phone. Then I saw the fact that the accessible memory was something like 5.9GB...
Rating: 3 Votes

NATO
I'm not actually surprised by this, there was some seriously good deals available for the iPhone 5C which suited a lot of people who wanted an iPhone but were previously put off by the price.

For example, one of the deals I saw was a 32GB iPhone 5C, with a huge 4G data/calls/text allowance. The phone was £0 up front, £23.99/mth over 24 months. That's pretty spectacular for someone who wanted an iPhone but wasn't fussy.
Rating: 2 Votes

Toltepeceno
What? No usual blather about the 5c being a flop? Where's the guy claiming they only sell in the us?

Seriously, here in mexico the 5c is what you see selling, many places don't even carry the 5s. I havn't looked around to see if the 6's are here yet, but I'm willing to bet now you see the 5c and 5s but few 6's.
Rating: 2 Votes

MrXiro
What I've been saying from the release of it. Great phone for the general audience. If the specs were higher I would have preferred the build of the C model over the 5S. Were the 6 Plus reinforced with a steel backplate there would be no bendgate issue to speak of.
Rating: 2 Votes

blueflower
I continue to be baffled as to why some people think the 5c is a crappy phone. Afterall, it is basically an iphone 5 in a plastic case sans the battery issue.

I do not see it as a phone for non-techies, because let us face it the 5c can do almost everything the 5s can do and the average iphone user is not a techie.
Rating: 1 Votes
[ Read All Comments ]