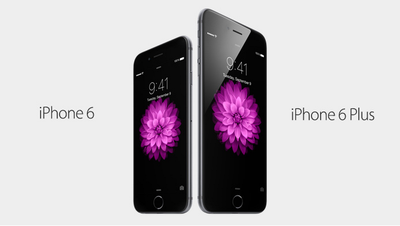 “iPhone 6 and iPhone 6 Plus are the biggest advancements in iPhone history,” said Tim Cook, Apple’s CEO. “The iPhone is the most loved smartphone in the world with the highest customer satisfaction in the industry and we are making it much better in every way. Only Apple can combine the best hardware, software and services at this unprecedented level and we think customers are going to love it.”

The new models feature a number of hardware changes, including a chassis that is 6.9 mm thin for the iPhone 6 and 7.1 mm for the iPhone 6 Plus. Both models feature the next-generation 64-bit A8 chip, which features 2 billion transistors on a 20nm processor. The A8 delivers 25% faster CPU performance and is 13% smaller and 50% more energy efficient when compared to the A7. The device also comes with a next-generation M8 motion coprocessor which can now estimate distance and elevation changes with a new barometer.

The iPhone 6 and iPhone 6 Plus also support a new camera system with a brand-new 8-megapixel sensor, along with a circular true tone flash. Apple is also touting "Focus Pixel" technology, which allows the lens to move in and out to better determine autofocus points. The camera also features next-gen tone mapping and noise reduction. Apple also says the camera is complimented by a new gyroscope and image stabilization built into the A8 processor. Exclusive to the iPhone 6 Plus is an optical image stabilization system.

As for video capabilities, both devices shoot in 1080p at 30fps and 60fps, along with 240fps slo-mo video, which is up from 120fps on the iPhone 5s. The front-facing FaceTime HD camera has also received a new sensor with a f2.2 aperture that lets in 81% more light. Users can also shoot single-shot HDR photos and take HDR video.

I quit work to watch this keynote.

Someone definitely has his priorities in order :p
Score: 49 Votes (Like | Disagree)

Apple pissed off a lot of people today in a myriad of ways.


So in other words, the exact same reaction as every other keynote Apple has ever done.
Score: 37 Votes (Like | Disagree)

AppleFan115
I quit work to watch this keynote.

Friday November 25, 2022 2:58 am PST by Sami Fathi
An Apple engineer has addressed the lack of lossless audio support in the second-generation AirPods Pro in a new interview. Current Bluetooth technology in the AirPods lineup means that Apple's audio products do not support Apple Music Lossless audio. Apple has previously hinted that it may develop its own codec and connectivity standard that builds on AirPlay and supports higher quality...
Read Full Article • 168 comments