With Apple's new iPhone 6 and iPhone 6 Plus going on sale in the first group of launch countries beginning on Friday, September 19, long lines have already started to form across the world as many anticipate the release of both devices. Apple retail customers in Australia will have the first opportunity to purchase the new handsets at 8 AM on Friday, as some have already begun lining up outside of the company's various retail locations. Currently, it is 7:10 PM on Thursday, September 18 throughout many parts of Australia. 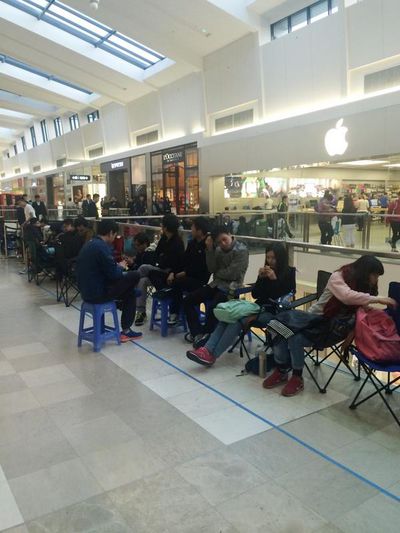 Image credit: @beth_blanchard
One photo taken by Guardian Australia writer Bethanie Blanchard shows many customers lining up outside the Apple Store Doncaster, as the line is said to have started at 6 AM and stretches around the entire length of the shopping center.

Meanwhile, a photo shared by Twitter user @rodgerodger shows the line surrounding an Apple Store in Brisbane. The image shows numerous customers setting up chairs and laying down supplies in preparation to stay the night ahead of the launch of the iPhone 6 and iPhone 6 Plus in the morning.

In addition to Australia, Apple's iPhone 6 and iPhone 6 Plus will be available in the US, Canada, France, Germany, Hong Kong, Japan, Puerto Rico, Singapore and the UK starting Friday, with Apple Retail Stores beginning sales at 8 AM. The company is also implementing a reservation pass system at its retail stores for those who line up, which will keep track of the line position of each customer and ensure that those waiting receive a device.

locust76
Here come the attack ads from Samsung poking fun at all the people lining up for iPhones... while nobody lines up for new Samsung products.
Score: 29 Votes (Like | Disagree)

fullauto
Just had an Asian sit an Aussie down in front of me in one of these 'reserved' seats, I asked hey did you buy this seat or something? He said yeah, I asked how much, he said $50 bucks.. I told security, they are now checking security footage, guy denies he said anything to me.. Ringleader calling me a liar.. Now left with a mob of 30 of them.. What a joke..
Score: 15 Votes (Like | Disagree)


Had about 30 Chinese push in before me, from number 110 to about 140 now.. Bragging about buying two and selling the other for double the price on ebay.. Not fair really.. They all have grouped together in 2's and 3's on specially laid out seats, but none of them seem to really know each other.. Oddest thing I've seen.. There is approx 4-5 'Aussies' amongst 250 others..
Score: 13 Votes (Like | Disagree)

iOzzie
These idiots do not reflect other normal Australians.....