Pre-order supplies of the iPhone 6 in the United States have dwindled significantly since pre-orders kicked off last night, with most models of the device now displaying shipping estimates of 7 to 10 days. The new shipping estimates mean customers who place an order now will likely be receiving their phones in October rather than September.

While there are still a some AT&T and Verizon iPhone 6 models available in space gray and gold, silver models for most carriers have now sold out. T-Mobile continues to have some availability in gold, with space gray models carrying shipping estimates of 7 to 10 days.

Though it has taken nearly a day for Apple to run out of most iPhone 6 models available to ship on 9/19, supplies of the larger iPhone 6 Plus were much more limited. Apple's online store was down until just before 3 AM PT, at which point almost all iPhone 6 Plus models were showing shipping estimates of 7 to 10 days before slipping to 3 to 4 weeks just hours later. 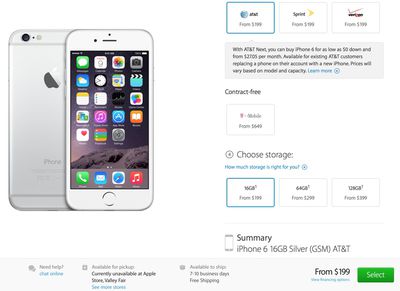 According to Apple, response to the iPhone 6 and 6 Plus was "incredible," with the company setting a new record for overnight pre-orders despite pre-order hiccups.

Though customers will no longer be able to pre-order most models of the iPhone 6 or a 6 Plus from Apple's site for delivery on 9/19, Apple will have launch day supplies at its retail stores on that date. Oftentimes, people wait in line for hours in an attempt to get a device from a retail store.

Supply of the iPhone 6 Plus seems to be similar to supply of the gold iPhone 5s last year, which became almost instantly unavailable. Unlike last year, however, there were few reports available on supply quantities.

CausticSoda
Still laughing at all those people saying the 5.5" would never sell and who wants a phablet, blah blah blah. Well, look for yourselves...
Score: 44 Votes (Like | Disagree)

still over here just chillin' with my 5S which surprisingly is almost identical under the hood to the 6...hmmm...

lol my girlfriend went on her lunch break to the Apple Store in our local mall to get the iPhone 6, white/silver, 64GB. no issues at all. the 6 Plus was completely OOS in every config

at least at my store, they seemed to have plenty of iPhone 6's

you're girlfriend didn't get ******. the phone isn't even being sold in stores yet.

edit: apparently this was a joke we were supposed to get. *shrug*
Score: 22 Votes (Like | Disagree)

I'm surprised it has taken as long as it has.


I think Apple really ramped it up this year thinking there would be enough, and there still weren't.

And I think they really underestimated the demand of the 6+, from a poll I saw, it seems to be about 50/50 on 6 vs 6+...I'm betting Apple figured it wouldn't be anywhere near that even.
Score: 17 Votes (Like | Disagree)

carjakester
I'm surprised it has taken as long as it has.
Score: 17 Votes (Like | Disagree)

lol my girlfriend went on her lunch break to the Apple Store in our local mall to get the iPhone 6, white/silver, 64GB. no issues at all. the 6 Plus was completely OOS in every config

at least at my store, they seemed to have plenty of iPhone 6's


Too bad MacRumors got rid of the downvote button.
Score: 14 Votes (Like | Disagree)
Read All Comments