More Evidence of NFC Support for Both iPhone 6 Models

Last week, Chinese repair firm GeekBar shared a claimed schematic for the iPhone 6 showing what was claimed to be the pinning diagram for the device's rumored near field communications (NFC) chip. The part addressed on the schematic, PN65V, was thought to be a version of NXP's PN65 NFC package currently used in several Android devices.

The leak is one of several schematics shared by GeekBar over the past week and a half, and while some of the components have been misidentified, it is looking increasingly likely that the schematics themselves are legitimate. Seen in that light, it is worth taking a look back at the NFC claim to see if there is additional evidence for it. 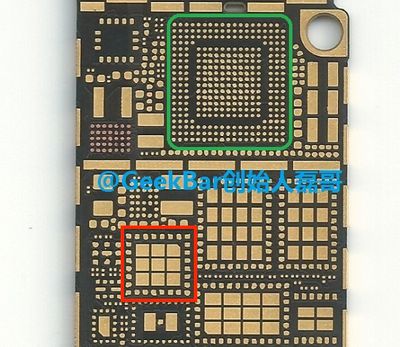 Closeup of 4.7-inch iPhone 6 logic board with likely NFC chip location boxed in red, LTE modem boxed in green
MacRumors forum member chrmjenkins has pointed us toward a document showing the package used by NXP for its PN65, noting that it measures 5 mm x 5 mm with 32 terminals for connectivity. In examining the bare logic boards from the 4.7-inch and 5.5-inch iPhone 6 models, chrmjenkins believes he has spotted where that chip will be located.

Broader view showing likely NFC chip location boxed in red: 4.7-inch iPhone 6, iPhone 5s, 5.5-inch iPhone 6 (left to right)
The location on the board is a square patch that does not correspond to any component from the iPhone 5s logic board, indicating that it may indeed be for a new component such as an NFC chip. Existing components may of course see changes in shape between generations, but many of the current major components can be mapped reasonably well to locations on the iPhone 6 logic boards, leaving relatively few candidates for this new square patch.

Rumors of NFC for the iPhone have circulated for years, but they have yet to come to fruition. As a result, this year's crop of NFC rumors has understandably been greeted with skepticism, although the volume and specificity of the rumors has seemed greater this time around, with multiple sources pointing toward an NXP chip solution for the iPhone. And with Apple rumored to be making a push into mobile payments as soon as later this year, the time may finally be right for Apple to bring NFC to the iPhone.

sputnikv
If and when the iPhone gets NFC capabilities, it will be huge. Not because it'll be the first, it won't be, but because it'll boost the install-base of devices supporting NFC that venders and stations will really operate to include the tech moving forward.
Score: 16 Votes (Like | Disagree)

NFC has been available as a technology for quite some time, and Apple launched Passbook without it. NFC doesn't seem to be gaining any market traction?

happygodavid
I just noticed yesterday that Apple Retail employees are using new EasyPays for for checkout/scheduling (I worked there for 4 years, so I'm a nerd and notice these things.). The new models have NFC on them. I doubt Apple would go to the trouble of updating/replacing their fleet of checkout devices just to accept payment from competitors' devices. The new iPhone will have NFC. I bet an appendage on it. Anyone up for the challenge? Whoever loses the bet loses an arm. Pics get posted to Macrumors. ;)
Score: 11 Votes (Like | Disagree)

This feature will be about the only thing dragging me up to a 4.7inch phablet... rather than getting my 32GB TouchID upgrade from a discounted 5S.

Every time he predicts something, people are quick to generalize 'analysts' and point out how often they're wrong.

Ming-Chi Kuo, while not 100% reliable, is a lot more reliable than other analysts. He constantly make correct predictions that are not obvious at all and clearly more than educated guesses.

And while we're at it, also don't automatically dismiss a rumor coming from a 'random blogger' if he's Mark Gurman.
Score: 6 Votes (Like | Disagree)
Read All Comments