Following the publication of several photos over the weekend showing what was claimed to be the bare logic board for the upcoming 4.7-inch iPhone 6, Nowherelse.fr now shares [Google Translate] a new set of photos showing the same part reportedly from the even larger 5.5-inch iPhone 6 model.

The photos include side-by-side comparisons of the part from both iPhone 6 models and the iPhone 5s, and while it does not appear to be confirmed which iPhone 6 logic board is for which device size, there are now clearly two distinct parts larger than the current iPhone 5s logic board. 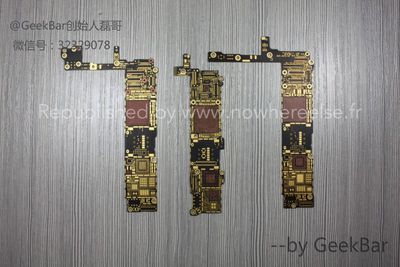 Logic board fronts left to right: newly shown iPhone 6, iPhone 5s, previous iPhone 6
(Click for larger)
The component layout of the logic boards from the two iPhone 6 models appear very similar, but the board design and screw hole layout are somewhat different, particularly on the upper portion of the board including the arm extending across the top of the device above the battery. As with the first logic board, this part allegedly includes support for near field communications (NFC).

Logic board backs left to right: newly shown iPhone 6, iPhone 5s, previous iPhone 6
(Click for larger)
While the legitimacy of the parts can not be confirmed, they do appear very similar to existing parts and exhibit complexity that would be expensive to fake. They also contain part numbers (820-3675-04 and 820-2486-09) in the pattern followed by Apple. Finally, the two logic boards measure 57.1 mm and 61.5 mm wide, meaning that certainly the larger one and probably the smaller one must be for larger devices considering the iPhone 5s has an overall width of 58.6 mm.

The iPhone 6 is expected to debut around the September timeframe, although it is unclear whether that launch will include both versions or only the 4.7-inch model. Rumors have been split on whether the 5.5-inch model will launch simultaneously or up to several months later due to production challenges.


Every time I see complaints about battery.. it's almost always because they left apps like Facebook running in the background after using it.. I always close all my apps down.. The FB and other notifications still get through just fine.. don't need to leave the app open.. that just kills battery. :rolleyes:

however i do close them but its more like an OCD issue than battery concerns :D
Score: 18 Votes (Like | Disagree)

And the smart ones here all are crying a little on the inside that Apple is making phablets. But I guess they'll sell so it's not all bad.

So what you're saying is, only dumb people want 5.5" phones?
I really have a hard time understanding all the hate towards a bigger device. I can understand if you don't prefer it and leave it at that, but it's like some people are losing their minds about it.
Makes no sense.
Score: 9 Votes (Like | Disagree)

Not expensive to fake in Photoshop!
Score: 9 Votes (Like | Disagree)

More wasted space. Of what value is a photo of circuitry to readers? Of what benefit is it? So, they moved a screw hole and it's complex. It doesn't provide any information on features, benefits, or final visible design, so why waste the bandwidth?


It's for one, a click generator, and two, it gives the opportunity for 5.5" lovers to re-iterate their desire for a larger phone for the 47th time :D
Score: 8 Votes (Like | Disagree)
Read All Comments