In an attempt to garner new users from parent company Apple, Beats Music has launched a contest to coincide with the upcoming London iTunes Festival. Beats Music's #GoWithMe contest is offering 25 Beats Music users in the United States a chance to win two tickets to see one of several musical acts during the festival, with the prize package including airfare to London and hotel accommodation.

Users do not need to pay for Beats Music to enter the contest, but a Beats Music account is required. After signing up for an account, Beats listeners can enter to win tickets to one of five performances by navigating to the artist's page on the Beats Music site: Kiesza, Calvin Harris, Pharrell Williams + Jungle, Maroon 5 + Matthew Koma, and Ed Sheeran + Foy Vance. 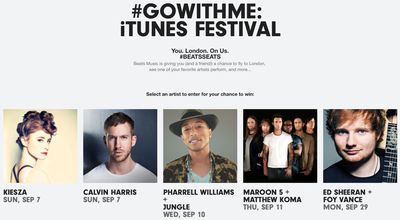 Tickets to the London iTunes Festival traditionally are available for free, but are distributed through iTunes via a lottery system due to extremely high demand. Beats Music will announce the winners of the contest on August 28.

Announced last month, Apple's London iTunes Festival will begin on September 1 and run for 30 nights, with a different musical act performing each night. Announced performers include deadmau5, Pharrell Williams, Maroon 5, Lenny Kravitz, Mary J. Blige, and more. While most performances have been revealed over the last couple of weeks, two performers remain unknown.

Apple has been heavily promoting Beats Music in recent weeks, adding Beats Music to the list of "Apps Made by Apple," encouraging new iOS users to download the app, and sending out emails about Beats Music. The promotions have been somewhat successful, temporarily skyrocketing the Beats Music app to the top 10 free apps chart in the App Store. Beats Music wasn't able to retain its position on the charts, however, and has dropped back down to number 30.

Just stating my opinion. Having the Beats app in the "Apps Made by Apple" section is just weird and confusing to the average person. So much for "just bought the company".


How is that confusing? People who didn't know there was a Beats app before the acquisition don't care and aren't confused. :D
Score: 2 Votes (Like | Disagree)

Aluminum213
Until Beats Music becomes fully integrated into iOS and merges with iTunes Match in someway, it's going to remain a far far far 2nd to Spotify
Score: 2 Votes (Like | Disagree)

billystlyes
Tim Cook was a fool for trying to buy cool.
Score: 1 Votes (Like | Disagree)

nick42983
Thanks for the reminder to delete my Beats app and recover some GBs of space. After the poor performance (lagging and skipping), seeing the app promoted in various rap videos and the recent Spike Lee "documentary", I decided to go in a different direction. It's also the ugliest Apple app icon IMHO. Imagine all the things that could be done with $3 billion, and the best idea Cook and Co. had was to buy this app along with Dr. Dre and Jimmy Iovine? Give me a break
Score: 1 Votes (Like | Disagree)