While we've seen dozens of images depicting iPhone 6 elements that are likely to be real versions of parts that will make their way into the finished device, we've also been seeing quite a few iPhone 6 mockups, iPhone 6 clones, and other fake iPhone 6 parts as we creep closer to the device's launch date.

French site Nowhereelse.fr [Google Translate] has today shared what it believes may be a genuine iPhone 6 box insert (or quick start guide) that "confirms" the launch date of the iPhone 6 as Tuesday, September 9, but MacRumors believes the insert to be fake based on several different design elements.

(Click for Full Size)
Nowhereelse.Fr compares the September 9 date listed on the fake insert to the "10" date on the calendar icon of the original iPhone 5s card as proof the iPhone 6 insert is real, but the site erroneously assumes that the date on the iPhone 5s insert referred to the Tuesday, September 10 unveiling of the iPhone 5s.

The "10" date actually corresponds to the date when iOS 7 debuted, Monday, June 10. Therefore, the iPhone 5s card did not depict the phone's debut date, which means an actual Apple quick start card for the iPhone 6 would be unlikely to display "September 9" over the iOS default date.

Additionally, the design of the card also lacks slashes between the Ring/Silent switch and Home Button/Touch ID sensor, and the font of the time is not quite in line with Apple's style. Nowhereelse.Fr claims that Apple has opted for a more simple insert design that does not show the actual device to explain its difference from the iPhone 5s insert, but it is unclear whether that is factual. Even when poised as a possible rough draft for a finished quick start guide, the glaring errors on the card continue suggest that it is indeed a fake and not representative of the actual insert card that will be included with the finished iPhone 6.

Apple is expected to introduce its iPhone 6 on Tuesday, September 9 at a media event. The device is rumored to come in two variations, 4.7 inches and 5.5-inches, but it is unclear if both models will ship at the same time as production issues are said to be plaguing the larger iPhone 6.

jetjaguar
bezels are too big
Score: 12 Votes (Like | Disagree)

Hexiii
Guys, the back was leaked too! 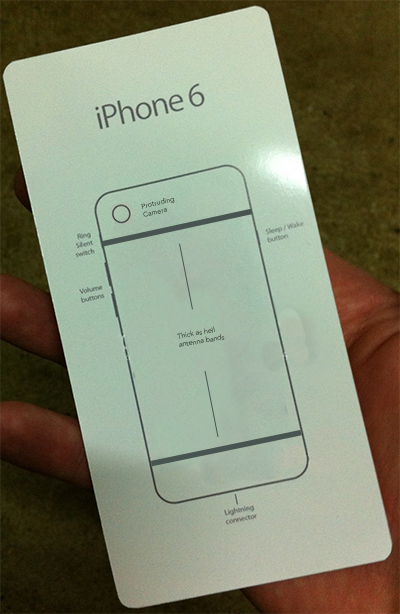 mbrannon47
No. Just no. Here we are again with Myriad Pro Regular. The iPhone 5s uses Myriad Pro Light. Also, Apple would NEVER put the lock screen on the box because it shows an actual date. That dates the product right out of the gate. Why is this even posted??
Score: 6 Votes (Like | Disagree)

Looks exactly like the iPhone 4,4S, 5, 5S except the sleep/wake button !

The word "exactly" does not mean what you think it means. Pretty important differences have been pointed out above.
Score: 3 Votes (Like | Disagree)

Radio
Macrumours this wasn't even worth posting.

Well... I know it may sound picky... but that's what I think guys!
Score: 3 Votes (Like | Disagree)
Read All Comments