Thursday August 21, 2014 9:51 am PDT by Eric Slivka
Back in January, we profiled growing concerns from owners of 2011 15-inch and 17-inch MacBook Pro models over failing graphics chips and system crashes. While Apple has assisted some customers with logic board replacements, the issues have been known to reoccur after servicing and some users have been faced with expensive repair bills to address the problem. 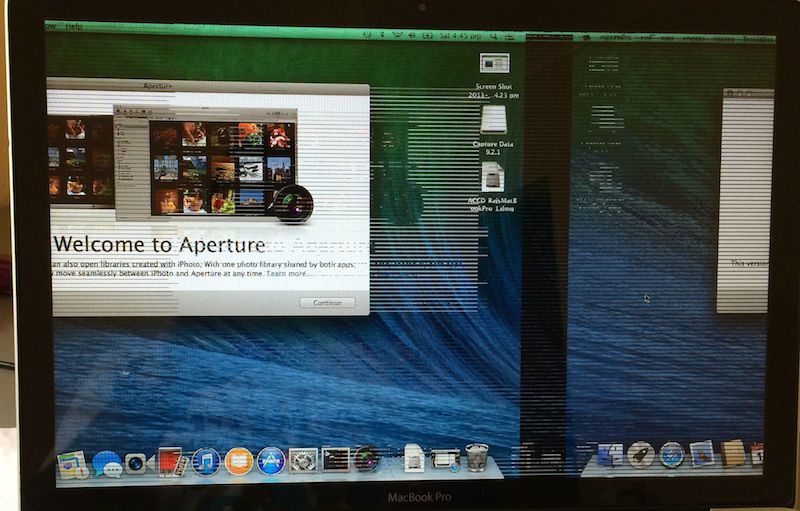 With a Facebook group exceeding 2,200 members and a change.org petition requesting a more substantial response from Apple having surpassed 10,000 signatures, the issue appears to be a fairly widespread one, and now lawyers are getting involved in the situation.

Alerted to the pervasive failures concerning the 2011 MBP GPU’s, we commenced an investigation leading us to your community.

Your posts are a great source of information, but to determine if any legal claims may exist, we need your help. Please take a few minutes to complete the survey below.

The firm touts its experience with lawsuits against other technology companies including topics such as Google Buzz privacy issues, Lenovo IdeaPad hardware problems, and more. While it is not certain that a class action suit will be filed against Apple, it's clear the issue is a substantial one.

The discrete graphics chips used in the affected machines are from AMD, and Apple previously launched a replacement program for AMD graphics cards used in 27-inch iMacs from a similar time period. While the graphics chips used in the two machines are different, the iMac repair program indicates that Apple would be willing to launch a similar program for the MacBook Pro if it is able to diagnose the issue and be convinced the problem requires such a program. Typically such programs provide for free repairs and reimbursement for those who had previously paid for repairs to fix the issue.

I need to start planning what to do with my $0.46 settlement.

maflynn
I'm not a fan of class action suits but its these types of situations that its meant for. Clearly their is something wrong with the 2011 model and apple's refusal to listen to its customers if shocking. Hopefully they'll change directions and fix the MBPs
Rating: 9 Votes

Why not? Hey you know what, in the state of California they legally have to be able to repair or replace any electronics for 7 years. So lets do that. Lets give everyone a 7 year full warranty including damage on all Apple products. But how dare Apple raise the price to cover it. Not one penny. They have billions in the bank they can afford it.

And even better. If you have any issue at all, no matter how minor you get an instant swap to a new retail boxed whatever. Oh that model is no longer sold, great you get an upgrade


Reading your posts mate, I'm going to say you got out of the wrong side of bed today?? Do you need a hug? :p
Rating: 8 Votes

Dave.UK
Quite right as well. Hopefully will make Apple sit up and take notice and do something to resolve this issue.
Rating: 7 Votes

If something is out of warranty I kind feel like apple doesn't need to do anything, but that depends on your warranty period in your country as to how fair that is.


Luckily in the UK we have the Sales of Goods Act. If you purchase an item that is supposed to be premium for £2000, its reasonable to expect it to last for more then 2 years. All you need is an independent report showing that the item is inherently faulty, as would appear in this case and Apple have to repair it.
Rating: 6 Votes

BeamWalker
Dedicated GPU's on Apple's mobile Computer's don't really have the best track record when it comes to a long lifespan.
Rating: 6 Votes


Something confusing about that? Its a way of getting people with the same problem together to look at what action can be taken to take the matter forward.
Rating: 6 Votes

Menopause
I am a victim of this debacle and had to shell out €550 ($730) in Germany to have my MacBook's logic board repaired. 4 months later the replaced logic board exhibited the same problem and stopped working.
Rating: 6 Votes

6836838
Mine failed on my MBP Mid 2010 after 2 years. In the UK, a product should be in working order for a 'reasonable period of time' (sale of goods act) and I argued that a premium cost laptop should last at least 5 years, else it's not 'fit for purpose'. Apple replaced it free of charge, even though it was outside of the standard 1 year warranty.

Consumers need to understand the law and forget about 1 year warranties! Just because a product is outside of a manufactures warranty doesn't mean that it shouldn't be fixed free of charge outside of this. It's another reason why AppleCare is completely pointless (and a waste of money), at least in the UK.
Rating: 5 Votes