Many early and late–2011 MacBook Pro owners with discrete graphics cards seem to be experiencing GPU failures and system crashes on their machines. In addition to several tips received by MacRumors, there's a lengthy thread on the issue on the Apple Support Communities, a Facebook group, and many reports of trouble on our own forums.

It appears that the MacBooks, first released on February 28, 2011, are displaying screen glitches primarily during graphics-intensive work or games. MacBook owners have noted visible striations and image distortion or an entirely blank screen, which can often be temporarily fixed with a reboot. 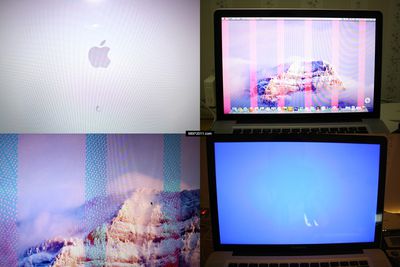 Mid–2011 iMacs with AMD Radeon HD 6970 graphics cards experienced similar failures and in August of 2013, Apple initiated a Graphics Card Replacement Program for the computers, replacing the graphics cards of affected iMacs at no cost.

Sure, Not
That's quality right there.
Score: 22 Votes (Like | Disagree)

Thanks. Good idea. I'll upgrade to a new 17" Macbook pro with Matte display.

Nothing to see here guys. I don't think anyone uses a 2011 MBP with ATI graphics anymore anyway? IF they do, its time to upgrade.

ka-spot
This is really BAD thing !
Score: 7 Votes (Like | Disagree)

Had this problem on my Early 2011 MBP last year. Apple replaced the logic board and battery(!) an no charge under AppleCare. No problem since.

Always get the AppleCare.


Apple should deliver better products or provide better warranty. A 3 year old (2011 you say) computer of 2000 shouldn't crap out randomly and in need of a 500 repair. And when it does Apple should just replace whatever parts necessary free of charge.
Score: 6 Votes (Like | Disagree)

pski
Had this problem on my Early 2011 MBP last year. Apple replaced the logic board and battery(!) an no charge under AppleCare. No problem since.

Always get the AppleCare.
Score: 6 Votes (Like | Disagree)
Read All Comments

Sunday January 16, 2022 8:56 am PST by Sami Fathi
Continuing the tradition set with the iPhone 13 Pro, only the highest-end iPhone 14 models will feature Apple's ProMotion display technology, according to a respected display analyst. Ross Young, who on multiple occasions has detailed accurate information about Apple's future products, said in a tweet that ProMotion will not be expanded to the entire iPhone 14 lineup and will remain...
Read Full Article • 71 comments