Photos depicting what might be the rear shell of the larger device have finally surfaced, however, and have been shared by Evasi0nJailbreak.com. According to the site, the photos have been sourced from "deep within Apple's supply chain in China," and may be only a prototype of the final rear shell. 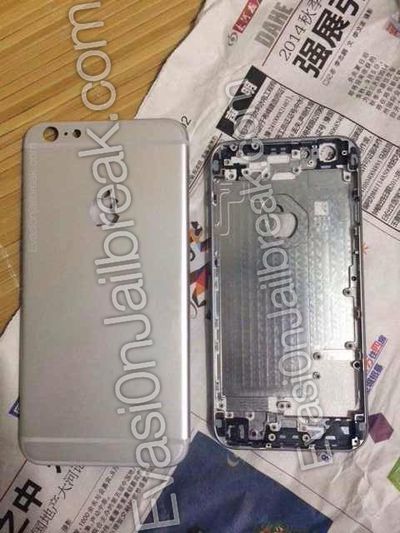 Apple is expected to introduce the iPhone 6 at an event on September 9, but it is unclear whether the company will show off both the 4.7-inch and 5.5-inch models at the same time. If the 5.5-inch iPhone 6 does make an appearance at the event, it may not ship to customers until several months after the 4.7-inch iPhone 6 ships due to production delays.

LostMyiPhone
It does exist!!
(they do exist)

(reminds me of the m&m's commercial with santa. Stay tuned, it's out at Christmas time)
Score: 32 Votes (Like | Disagree)

aevelasquez
God, where is 1080p with his dose of denial when you need to rub his nose in it?
Score: 22 Votes (Like | Disagree)

iEnvy
That's it, pack it up non-believers. IT EXISTS!

medazinol
I moved to Android for 2 reasons: