Roughly six weeks ago, ABC News launched a new Apple TV channel offering a wide range of live and on-demand content from both national and select local feeds. Based on the first 30 days of availability, ABC News has now put together an infographic that offers a look at how the channel is being used. Among the interesting observations:

- Live video usage on Apple TV, which accounts for 20 percent of channel views, is 50 percent higher than on mobile and desktop combined.

- Peak usage for the ABC News Apple TV channel falls at 9 PM Eastern Time, likely due to that time period encompassing evening viewing hours for most of the United States. 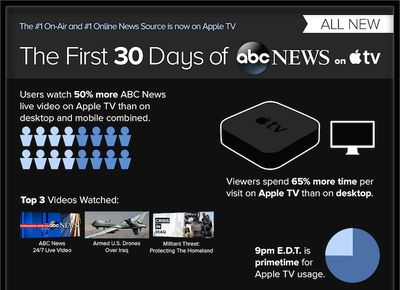 Apple has been adding new channels to the Apple TV at a fairly rapid pace, at least in the United States, although many of them require authentication through an existing cable service provider. The company has long been rumored to be working on a more powerful set-top box, but the latest rumors have suggested the device is unlikely to arrive until 2015.

furi0usbee
A good start. If people could get live news with Apple TV, many people would cut their cable cord so fast.... I've always said, if I could just get a subscription for 7-10 channels and supplement that with iTunes Season Passes, that's all I would need
Score: 9 Votes (Like | Disagree)

BrockC
These numbers should make the negotiations with service providers easier. :D
Score: 5 Votes (Like | Disagree)

thatisme
I still don't understand the draw to these App channels. If you already have a cable / sat subscription then watch cable. Why would the standard over-the-air channels require a cable subscription? ABC, NBC, CBS, FOX, WB, etc...

I watch only a handful of channels, but am required to buy multiple tiers on cable or DirecTV to get what I want to watch. On top of the over the air channels, I use ESPN, Velocity, Discovery, CNN, Fox News, MTV, Nick and the Golf Channel. ATv will show it's value when you don't need to already pay for service elsewhere and offer up a per-channel subscription independent of cable/sat. At $ 0.99 per month per channel, you could a-la-carte your viewing and I would suspect that a good percentage of users would be perfectly happy with that.
Score: 4 Votes (Like | Disagree)

A good start. If people could get live news with Apple TV, many people would cut their cable cord so fast.... I've always said, if I could just get a subscription for 7-10 channels and supplement that with iTunes Season Passes, that's all I would need


When do we get ESPN Go without needing a cable/satellite subscription?
Score: 4 Votes (Like | Disagree)


Blame the retransmission consent fees of the 1992 Cable TV act. Completely rigged the game in favor of the network affiliates and is one big roadblock for Apple and others reaching deals with cable companies. They're holding things up, looking for money, even though they produce nothing.
Score: 3 Votes (Like | Disagree)

Apple has been adding new channels to the Apple TV at a fairly rapid pace, at least in the United States,

Thanks for recognising that the situation in the US is not the situation elsewhere in the world. Here in the UK the AppleTV is, let's face it, little more use than an equivalently sized piece of solid plastic.

All the main TV channels here (that's all of the BBC, ITV, Channel 4, Channel 5, and Sky channels which adds up to a lot of TV) not only have no end of people watching their material using catch-up internet viewing, but their apps are present on pretty much all the platforms available - apart from AppleTV, that is. How disgraceful is that on Apple's part? What makes it even worse is that they ALL have apps on iOS devices apart from AppleTV, so porting them across to AppleTV would be a trivial matter.

Come on Apple, step up to the plate. If you want to be a credible player then you need to deliver on the basics. And not just in the USA but other places as well, particularly where the job would be easy.
Score: 3 Votes (Like | Disagree)
Read All Comments