Today marked the first day of Apple's public beta testing program for OS X Yosemite, letting thousands of non-developers download the software for the first time. With so many new users, new issues and bugs in the beta are coming to light and being catalogued in our Yosemite forum.

We've pulled out some user reactions from the forums to share, along with some tips on troubleshooting possible issues. For users having problems with the beta, the Yosemite forums can be an invaluable resource, and for users still debating whether or not to install the beta software, make sure to check out this post and our forums before taking the plunge as Yosemite is still somewhat unstable.

First Impressions
A lot of new Yosemite users think that the operating system looks great. According to one user, it makes Windows and Mavericks look antiquated in comparison with its new focus on translucency and clean lines. A "Yosemite is Beautiful" thread is full of praise, with users calling it "stunning" and "the best OS X has ever looked." 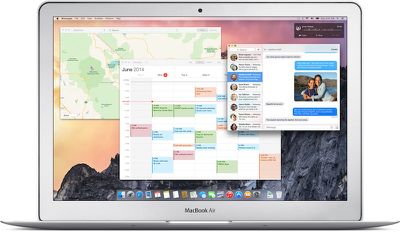 While there are a lot of Yosemite users who like the changes Apple's brought to Yosemite, there's a much longer complaint thread entitled "Yosemite Looks Terrible" that includes complaints about Dark Mode, "crappy" fonts, and the bland look of the translucency. Users also say Yosemite looks far less appealing on a non-Retina display.

Yosemite's Dark Mode, screenshot from Yosemite forum thread
Thus far, most users have not noticed significant performance improvements going from Mavericks to Yosemite, but that could change as Yosemite is still very much in a beta form.

Bugs and Issues
A lot of users have received an error message suggesting their Yosemite codes had already been redeemed after requesting a code. According to Apple, simply refreshing the beta page will provide an entirely new code.

One new Yosemite user who installed the operating system on a partition discovered that Yosemite may cause problems with partitions. Other users have also reported issues with partitions after installing Yosemite, while some have had no problems at all. The linked thread contains some Terminal fixes for users experiencing issues.

There's a lengthy bug thread on OS X Yosemite that has been added to throughout the beta testing period. Some remaining bugs include poor management of dual iTunes accounts, crashes in Activity Monitor, making and receiving calls with the FaceTime app, and unreliable WiFi connections. Problems with specific apps are listed in a separate thread, but some issues include frequent crashes with apps like Spotify and Microsoft Office. Apps like Final Cut Pro X, Aperture, iMovie, and Pixelmator also do not appear to be fully functional.

Handoff and Continuity
For users who have the iOS 8 beta installed on their iOS devices, MacRumors forum member Armen has put together a detailed walkthrough on how to set up Continuity and Handoff, new integration features introduced with the two new operating systems. Continuity appears to be largely functional for users with compatible machines, which have a Bluetooth LMP version of 0x6. Handoff does not appear to be working with 2011 MacBooks, but those machines do appear able to access SMS texts and phone calls.

New Features
New Yosemite users and those who are thinking about installing the beta should also check out the OS X 10.10: All The Little Things forum thread that details all of the lesser-known changes made to Yosemite throughout the beta testing period thus far to get familiarized with the operating system. For example, the latest developer preview introduced an entirely new version of iTunes, a new calculator app, and more.

Installation
Users who signed up for the public beta program can access promo codes to install Yosemite through the beta program website. Apple has also been sending out emails to those who have been selected to beta test Yosemite.

Apple recommends Yosemite be installed on a secondary machine as it is beta software, but users who do not have a secondary machine may want to install the operating system on an external drive or on a separate partition. OS X Daily has a set of instructions that walk users through both scenarios, explaining how to install on a partition or external hard drive. A MacRumors forum member has also explained how to create a bootable USB installer.

OS X Yosemite is expected to remain in beta testing until October, with new versions being seeded to both Appleseed participants and developers. Public beta test members will not, however, get as many updates to the software as developers.

Imagine that, on Complaint Central otherwise known as MacRumors, there are people being negative about Apple products. Never saw that coming. :rolleyes:
Score: 20 Votes (Like | Disagree)

What this article doesn't address is the systemic download failure rate part of the process. Many users experienced issues with getting their codes. The beta page went down because of problems and that is understandable. However, Apple rolled Mavericks out through the Mac App Store as well as countless updates to the OS and all the 3rd party apps they sell. Mavericks didn't have the download bugs that this "limited" beta has and continues to have.

Apple has no issue selling movies from the iTunes Store, some of which are 7-12GB in size. And yet many many users reported that when they try to download this 5GB Yosemite build that it simply fails time after time, getting anywhere from .5 to 4.5GB complete, often restarting itself at 0MB and then beginning the process again, only to ultimately fail.

"An error has occurred"

This happens over and over for some users but not for others. You can't begin where you left off, and internet speed is not a factor. Doesn't matter if you reboot, empty trash, clear caches. There is no apparent fix. And of course no actual help from Apple.

Sorry Apple, we realize this is a public beta, but this part of the process should be fairly simply and straightforward.

FAIL is the message we get over and over. Fail is what it is then.


You should contact Apple right away and request a refund for what you paid for the beta!
Score: 18 Votes (Like | Disagree)

Why did they bother with all this Dark Mode stuff when they could have just copied F.lux? It would have been so much simpler.


Because dark mode is just another UI option, and not intended to fulfill the same purpose of F.lux.
Score: 16 Votes (Like | Disagree)

SeattleMoose
Will my computer run more efficiently and faster?
Never mind that....check out the "new look".

With Snow Leopard, Apple said out of the gate that SL was all about working off bugs and making the OS run better. With SL there were no new features, no new "look", and (thankfully) no social media emphasis. Everything was about speed and efficiency. SL was by far, my favorite version of OS X to date.
Score: 14 Votes (Like | Disagree)

ThunderSkunk
How Apple went from getting more and more elegant and refined with their UI design, to more bland, cluttered, illegible... first iOS, now OSX?

wtf is going on over there, and is there any way of stopping it?
Score: 10 Votes (Like | Disagree)

How Apple went from getting more and more elegant and refined with their UI design, to more bland, cluttered, illegible... first iOS, now OSX?

wtf is going on over there, and is there any way of stopping it?


Yes, use something else and stop whining.
Score: 9 Votes (Like | Disagree)
Read All Comments