In a coordinated release today, a number of publications have released official overviews of the latest OS X Yosemite beta build alongside word of Apple's plans to open up the public beta tomorrow, July 24. As noted by The Loop, the public beta of Yosemite will be the same build released to developers on Monday.

The public beta version of OS X Yosemite is the same version released to developers on Monday, so to start off, consumers and developers will be running the same software. However, the developer version of Yosemite will be updated more often over the next few months than the public beta version. This is so developers can continue to test their software with the latest operating system available. Consumers really don’t need updates that frequently. 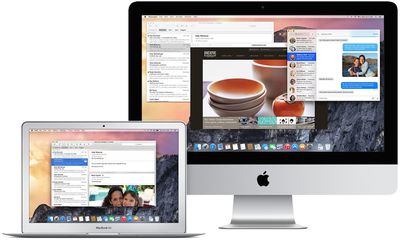 As far as the overviews designed to bring members of the public beta up to speed as the program launches, the general feeling is positive. Some note, however, that many of Yosemite's best features involve integration with iOS 8 and will be inaccessible during the public beta as the program covers only OS X. Here are a few snippets:

For anyone who thought OS X was getting stale, that it was evolving a little too gradually, you'll definitely want to check out Yosemite: It ushers in a new, iOS-inspired design, along with some new, iOS-like features. In my week of testing, I've found the updated look to be more visually pleasing than the previous version, yet still easy to navigate. The new features are generally welcome too, though some admittedly feel more granular than others.

We’ve had some time with the pre-release build ahead of today’s launch, and our time spent with the next version of Apple’s desktop OS has proven one thing: Yosemite offers a host of great new features for users new to Mac and experienced Apple fans alike. Even the pre-launch build feels like a solid step-up from Mavericks, which bodes well for the finished result that should launch once Apple irons out the bugs and incorporates user feedback from its beta test program.

I like its new design, the small improvements in Safari and Messages, and what appear to be promising fixes in Mail. It has already made a better impression on me than Mavericks did right out of the gate. But it’s also still very much a work in progress.

The official launch of OS X Yosemite to the general public will come later this year, likely in the October timeframe. The public beta program is limited to the first one million users to sign up on Apple's site.

Great, I know a lot of people have been anxious for this

Says in the main body of the report here (from The Loop) that it will be the same build initially but that it won't include all future updates that devs and AppleSeed testers get.

For the beta nubies: if you plan on d/ling tomorrow do not install over the OS of your current stable OS. Either install on a separate drive or partition. I know this sounds obvious but people install betas all the time over stable versions and live to regret it. Also be aware you cannot roll back to 10.9.x once you install 10.10 so if you do install it over 10.9 there is no easy way to go back which is why you should install on a separate drive or partition.


Has anyone heard anything about Mojave 10.11?


Yeah, I heard it has Siri, a refreshed iTunes app, and teleportation.
Score: 9 Votes (Like | Disagree)

bushido
That seems like a very bad idea. I mean iOS8 won't be a public beta so two separate iClouds will confuse and anger many people

Finally! Signed up for it awhile ago, can't wait. Definitely going to use Dark-Mode 24/7.

i doubt that, the implementation is pretty much useless and half the icons in the taskbar will be impossible to read cuz they havent been updated by the devs to support dark mode

For the beta nubies: if you plan on d/ling tomorrow do not install over the OS of your current stable OS. Either install on a separate drive or partition. I know this sounds obvious but people install betas all the time over stable versions and live to regret it. Also be aware you cannot roll back to 10.9.x once you install 10.10 so if you do install it over 10.9 there is no easy way to go back which is why you should install on a separate drive or partition.

This post needs to be stickied to the top of this thread in 72 point red text. :cool:
Score: 8 Votes (Like | Disagree)

Icaras
Boy, are there a lot of drama queens in this thread.

I'll be installing the beta tomorrow on top of Mavericks tomorrow as my main OS.
Score: 7 Votes (Like | Disagree)

Will it be safe to use in your main pc? Isn't it gonna be too buggy and cause problems?

If it was stable and without bugs it would have been released already. BETA means BETA, not that hard really.
Score: 7 Votes (Like | Disagree)
Read All Comments