During yesterday's WWDC keynote, Apple launched several new "Continuity" features to improve the cross-platform integration of iOS 8 and OS X Yosemite. One of the new abilities designed to allow better transitions from iOS devices to Macs is Handoff, which allows users to start a task on one device and swap to another nearby device.

As described by Apple, Handoff can be used for several different activities, including email and web browsing. Users can begin writing an email on an iPhone, for example, and then switch to a Mac to finish. Websites work similarly, allowing users to browse the web on one device, and then continue looking at the same website on another device. While this is already possible via iCloud Tabs, Handoff makes the entire process easier and extends the functionality to other apps. 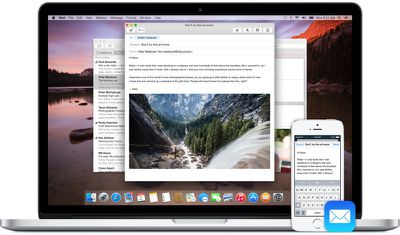 We believe you should be able to use the right device for the moment. We want the transitions between these moments to be as absolutely natural and seamless as possible.

When you're working on your Mac, your devices around you in proximity are aware of each other and are aware of what you're up to.

As demoed during the keynote, iOS devices and Macs are "aware" of each other, and can pick up a task when nearby. When composing an email on a Mac, for example, users will see an icon on the screen of their iPad or iPhone that can be tapped to allow them to continue writing on the iOS device. Similarly, an iPhone near a Mac will cause the activity to automatically pop up on the Mac's dock, allowing for a seamless transition between devices.

The enhanced Continuity between OS X and iOS also allows Mac devices in close proximity to an iPhone to both place and receive calls, leveraging Bluetooth and WiFi with the iPhone serving as a relay. Users can answer a call made to their iPhone on their Mac, a useful feature when an iPhone is across the room charging or otherwise inaccessible.

Similarly, iPads and Macs are now able to receive SMS messages from non-Apple devices, a function previously limited to the iPhone. iPads and Macs are also able to utilize an "Instant Hotspot" feature that allows them to connect to an iPhone hotspot with just a click, and AirDrop is also cross-platform.

Currently, Handoff and the other Continuity enhancements are features limited to developers who are using both iOS 8 and OS X Yosemite, but it will be available to the general public in the fall after the official release of the new operating systems.

Yet another feature taken from Android.


False. While you can send texts or make calls from Hangouts, you must do so using a Google Voice number. This utilizes your actual phone thus not requiring someone to have more than one number for you.
Score: 29 Votes (Like | Disagree)

Does the iPhone have to actually be paired to the Mac? Meaning that I can't use a Bluetooth speaker and use continuity? Or does Bluetooth just need to be on on both devices?

No pairing, it's almost certainly iBeacon based tied with iCloud.

Yet another feature taken from Android.


Where in the world does Android offer this? Sarcasm?
Score: 22 Votes (Like | Disagree)

newagemac
These are the types of unique features that make being in the Apple ecosystem so nice. I can see Microsoft moving in this direction as well but it's going to be hard for Google/Android since they don't have the vertical integration, don't have much control of the final software, and don't have a major desktop OS to integrate with in the first place. With Chrome OS being a glorified web browser, they are still trying to catch up with Microsoft and Apple were doing decades ago on the desktop.

Really looking forward to seeing more integration between mobile device and desktop OS from Apple and Microsoft. This is the future and unfortunately it looks like Android is going to be left out of the party.
Score: 21 Votes (Like | Disagree)

AngerDanger
Jeez, it was as around the time that Craig flung an email from his iPad to his Mac that I realized we're on the precipice of something that is going to be indispensable for posterity. "Believe it or not, your computer didn't always know when you had your phone with you… No, no, I'm not joking, guys, seriously!"
Score: 20 Votes (Like | Disagree)

Really can't wait to try this feature out, I'm sure this will make some more Android users switch too.
Score: 20 Votes (Like | Disagree)

I hope this doesn't get all crazy confusing when you got your friend over or a are living with other people and their devices. The last thing I want to see is a bunch of little things popping on the corner when it's not my device.


It's gotta be tied to iCloud. Unless your computer has their Apple ID on it I don't think it'll be an issue.
Score: 13 Votes (Like | Disagree)
Read All Comments