Apple is working to open up camera controls in iOS 8, giving photographers granular control over settings such as ISO, shutter speed, and more, reports AnandTech. While only a few manual controls will make it into the stock camera app, almost full manual control will be made available for third-party app developers to implement as of iOS 8. 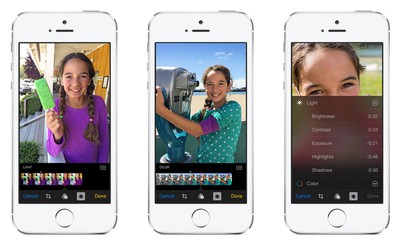 According to AnandTech, iOS 8's AVCaptureDevice APIs will let developers tap into advanced controls such as ISO, shutter speed, focus, white balance, exposure bias, EV bracketing, and shutter speed/ISO bracketing. The ability to manipulate these controls will provide photographers with new ways to creatively compose a shot or a video clip. Developers also can use these controls to offer a variety of camera presets and other behind-the-scenes algorithms that manipulate images during the capture process.

Apple has steadily boosted camera performance in its iPhone models by improving both the hardware and software that powers this feature. As a result, the iPhone is known for its exceptional camera performance and has been among the most popular cameras on Yahoo's image hosting service Flickr.

The next-generation iPhone 6 is expected to continue this trend with iOS 8 camera improvements such as time-lapse mode as well as new iPhone camera hardware that may include optical or electronic image stabilization, a wider aperture, as well as an ARTON filter to minimize CMOS color shifts.

Please give us a raw files mode. Nokia promised it, and then never delivered. It'd be such a nice option.

HurtinMinorKey
Please give us a raw files mode. Nokia promised it, and then never delivered. It'd be such a nice option.
Score: 6 Votes (Like | Disagree)

ThatGuyInLa
I would simply like for iOS to stop scaling the image down by half when you add a filter effect, then save, using the native photo editor!!!!!!
Score: 3 Votes (Like | Disagree)

PoppaKap
Why not create a full manual setting within the Camera App? Why just leave this ability for third party Apps?
Score: 3 Votes (Like | Disagree)

Yeah, but when you're done editing it, you compress it. The RAW file is only temporary for while you edit it...

From a camera that can generate RAWs, IMHO RAW files aren't temporary. They should be treated as your originals. The analogy to the film days is a negative. Just like in film (you want to keep your negatives), in digital you definitely want to keep your RAWs. You never know.

JPGs/Other compressions are used to share with. Those can *always* be generated on the fly.

Please give us a raw files mode. Nokia promised it, and then never delivered. It'd be such a nice option.


They did (http://conversations.nokia.com/2013/11/20/nokia-camera-raw-dng-support-available-now/). What they didn't do, was make it especially easy to get the damn things off the phone ( only jpegs auto sync )....

Would love for iOS to have this option....
Score: 2 Votes (Like | Disagree)
Read All Comments