Earlier this month, a clandestine report on anonymous sharing site Secret suggested Apple might be exploring the possibility of sensor-laden EarPods able to measure heart rate. The report was later revealed to be a hoax, but earphones with built-in sensors are a reality -- for LG.

First introduced during January's CES, LG's fitness-oriented Heart Rate Earphones are designed to offer real-time heart monitoring. The earphones, which use sensors to measure blood flow through the inner ear, connect to a small medallion that is strapped to the arm or attached to a waistband, tracking metabolic rate and maximum oxygen consumption, while allowing users to listen to music. 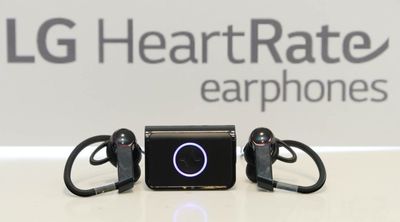 The medallion that connects to the earphones is designed to work as a data processing hub, sending biometric information directly to the LG Fitness app or other popular third-party apps on an iPhone via Bluetooth. The earphones are said to offer hi-fi sound and they include a built-in microphone for making calls.

LG's earphones are also designed to work alongside the company's Lifeband Touch Activity Tracker, which is a full-fledged fitness band that measures a range of fitness-related statistics, including distance covered, calories burned, steps taken, and more.

Though the report of Apple developing EarPods with sensors was fabricated, the company has invested research into the concept, filing several patents on the subject. It has also recently hired Eric Winokur, a researcher who developed an ear-worn vital signs monitor, likely for its wearables team. Despite this evidence, there's currently no indication that Apple is working on or plans to work on EarPods with sensors, but LG has demonstrated that the technology certainly exists should the company choose to go in that direction.

ForzaJuve
We already saw an article about Beats music. Can we get one about an iPhone 6 mockup now so we can call it a day and move on?
Score: 19 Votes (Like | Disagree)

Dave.UK
You couldnt make up the hypocrisy on this site!

When the "fake Apple rumour" was published, nearly every comment was saying how great the idea was and patting Apple on the back.

Obviously that turned out to be a giant hoax.

Now this LG product has been published, look at all the negative comments so far!

The cynical side of me wonders why MacRumors decided to post this article ;)
Score: 8 Votes (Like | Disagree)

Four oF NINE
Health applications are a niche market of limited interest
Score: 7 Votes (Like | Disagree)

You couldnt make up the hypocrisy on this site!

When the "fake Apple rumour" was published, nearly every comment was saying how great the idea was and patting Apple on the back.

Obviously that turned out to be a giant hoax.

Now this LG product has been published, look at all the negative comments so far!

The cynical side of me wonders why MacRumors decided to post this article ;)

I never knew this would be possible. Wow, awesome.

I was about to quote the same part of the article and make some remark about us living in the future! This is sort of amazing…

Health applications are a niche market of limited interest

Like tablets were a few years ago. Ah, so what you're saying is that LG is in an ideal position to really make something innovative that could cause the demand for "niche" applications to skyrocket? That is what you were saying, right, and you weren't just making a vapid comment? ;)
Score: 4 Votes (Like | Disagree)

Health applications are a niche market of limited interest

Personally, (and I guess I fall in this niche market being one of 30m casual joggers in the U.S.) I think this is a very cool concept. When I workout on my elliptical I always monitor my heart rate to make sure I'm in range. Wearing a strap while running is to much of a PITA. Headphones make it viable.
Score: 3 Votes (Like | Disagree)
Read All Comments